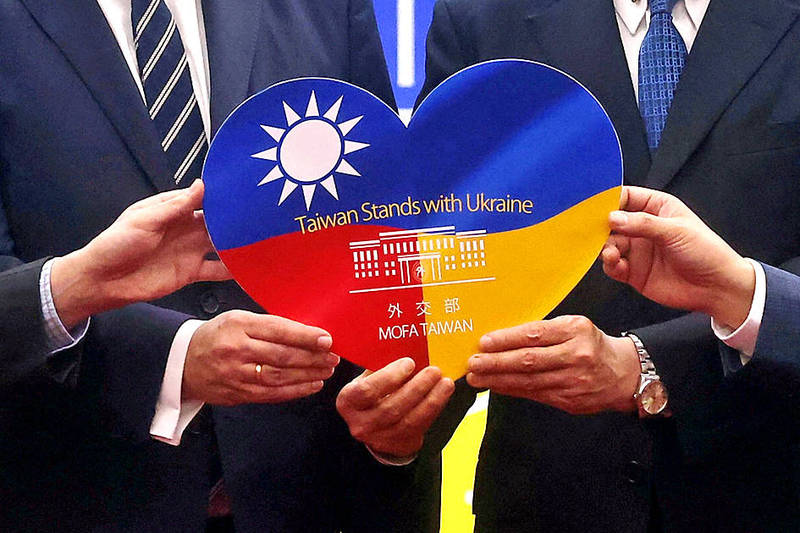 ‘TAIWANESE’ OFFICE? A source said that the retirement of China-friendly President Milos Zeman could clear the way for Prague to rename Taiwan’s office in the city

Czech Minister of Foreign Affairs Jan Lipavsky on Friday thanked Taiwan for a US$1.5 million donation it made to the Czech Red Cross to help Ukrainian refugees who have fled to the Central European country.

Lipavsky wrote on Twitter that he had earlier in the day expressed his country’s gratitude for the donation to Representative to the Czech Republic Ke Liang-ruey （柯良叡）.

“Taiwan and the Czechia share common values. I look forward to another great collaboration,” he wrote.

While Lipavsky did not disclose the amount, the Czech Red Cross wrote on Twitter that the US$1.5 million donation would be used to assist Ukrainians settling in the Czech Republic after being displaced by Russia’s invasion of their country.

Minister of Foreign Affairs Joseph Wu （吳釗燮） retweeted Lipavsky’s thank-you, saying that it was a pleasure for Taiwan to work with a “fellow force for good in assisting Ukraine’s people escaping the atrocities of Russia’s aggression.”

“Lot more to be done, but together we can stand with Ukraine,” Wu wrote on Twitter.

The Taipei Economic and Cultural Office in Prague, which represents Taiwan’s interests in the Czech Republic in the absence of official diplomatic ties, said that Lipavsky met with Ke at the Czech Parliament, along with Czech lawmaker Marek Benda, who is chairman of the Czech Republic-Taiwan Parliamentary Platform.

Lipavsky, 36, a member of the Czech Pirate Party, took office in December, under an appointment by Czech Prime Minister Petr Fiala.

In an interview with Politico last month, Lipavsky said that it was time for the EU to help “bullied” democracies such as Taiwan “as much as possible.”

The Politico report quoted unnamed diplomatic officials as saying that after China-friendly Czech President Milos Zeman’s retirement at the end of the year, Prague could, similar to Lithuania, rename the Taipei office in Prague using “Taiwanese.”

Beijing has imposed a political and economic cost on Lithuania for establishing the Taiwanese Representative Office in Lithuania, Taiwan’s first such office in Europe to use “Taiwanese” in its name.