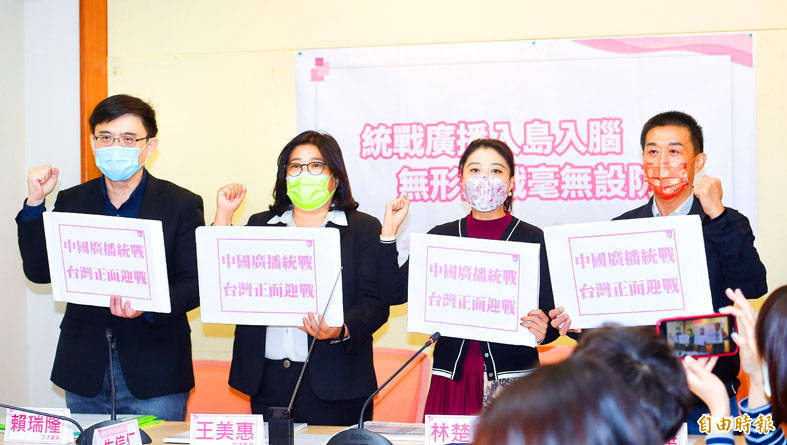 CROSS-STRAIT BROADCASTS: Lawmakers called on regulators to crack down on Chinese state media that target Taiwanese with pro-China news and disinformation

“It is clear that China is conducting cognitive warfare against Taiwanese. We demand that government agencies investigate these programs and deal with such intrusions to curb their influence,” Lai said.

The two media outlets are controlled and operated by the Chinese state agency China Media Group, administered directly by the publicity department of the Chinese Communist Party Central Committee.

“It is China directly intruding into Taiwan, not by military aircraft, but with broadcast media. This is a form of media warfare, which is more difficult to guard against,” DPP Legislator Michelle Lin （林楚茵） said.

“These Chinese outlets have produced entertainment programs relating to society and lifestyle that are enticing to listeners in Taiwan. The programs then lead to political affairs and news shows to disseminate false information … Gradually, they promote Chinese propaganda and disinformation,” Lin said.

The NCC has found 18 radio broadcast frequencies aimed at Taiwan and its outlying islands, with Cross-Strait Radio having three channels on the AM band, and two on FM, she said.

The broadcasts can be picked up in Taipei and most regions throughout Taiwan, but the NCC cannot curb them because the sources of the signals are not in Taiwan, she said.

“However, the NCC must try to block these radio frequencies,” Lin said.

“The MAC must also review laws governing communications and reception of Chinese state media, their video and broadcasting programs,” she added.

DPP Legislator Wang Mei-hui （王美惠） of Chiayi City said that elderly people in southern Taiwan often have the radio turned on while working.

“Now we have Chinese state media infiltrating our airwaves, but the NCC has done nothing about it,” she said.

NCC Chairman Chen Yao-hsiang （陳耀祥） should resign “to give way to another official who has the ability to do the job and shoulder the responsibility,” DPP Legislator Hsu Chih-chieh （許智傑） said.

Niu said that the NCC could have done more to curb or interfere with the broadcast signals of these Chinese outlets.