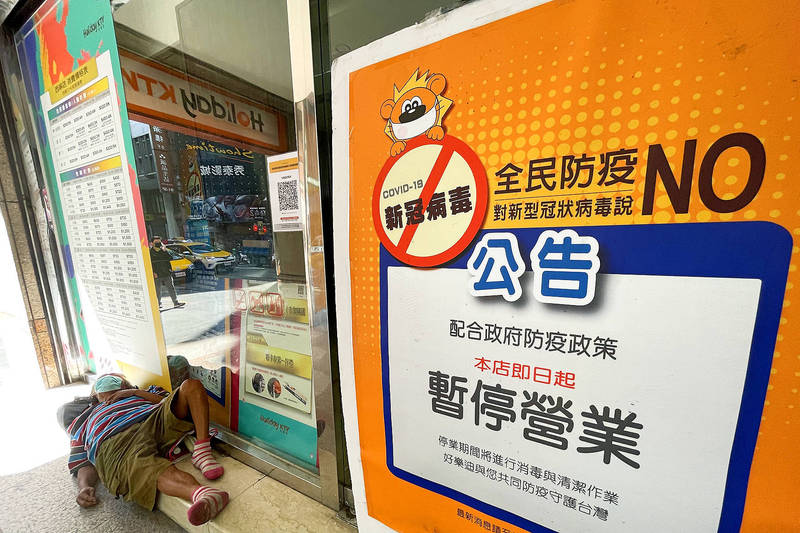 A homeless person yesterday sleeps on the sidewalk outside a branch of the Holiday KTV chain in Taipei, which has been closed amid a nationwide level 2 COVID-19 alert. Photo: CNA

BACK IN BUSINESS: Amusement arcades, Internet cafes, KTVs and board game venues could also reopen next week if the COVID-19 situation does not worsen, the center said

The Central Epidemic Command Center （CECC） yesterday eased some COVID-19 restrictions for public transportation, performances, exhibitions and sports event venues, effective immediately, as it also announced its conditions for reopening some banned recreational venues, including KTVs and amusement arcades, from Tuesday next week.

As the local COVID-19 situation is under control, some ministries have modified the disease prevention guidelines for the businesses they supervise, said Minister of Health and Welfare Chen Shih-chung （陳時中）, who heads the center.

The maximum capacity for tour buses has been expanded to the total seating capacity of the vehicle, he said.

For arts performances, exhibitions and sports event venues, Chen said that contact registration, body temperature measurements, the mask requirement, and the eating and drinking ban would remain in place, but crowd capacity constraints are being eased.

Tickets can now be sold on site and are no longer limited to a reservation system, but people should still maintain social distancing measures before, during and after a performance or game, Chen said.

“We are still observing any effects from the Mid-Autumn Festival long weekend on the local COVID-19 situation, and if the situation does not worsen, we plan to conditionally approve the reopening of some recreational venues from Tuesday next week,” he said.

The venues that would be allowed to reopen include amusement arcades, Internet cafes, KTVs and board game or mahjong venues, the center said.

These venues would have to implement a reservation system and contact registration, enforce the mask requirement and crowd density control, and have improved ventilation, Chen said, adding that hostess bars would not be allowed to reopen.

At least 60 percent of staff members at the venues are required to have received at least one dose of a COVID-19 vaccine for more than 14 days, he said, adding that they must implement health management measures and comply with the Ministry of Economic Affairs’ disease prevention guidelines for their respective business.

Aside from the general rules, specific disease prevention measures would be required at different recreational venues, such as one customer per machine at amusement arcades, wearing a mask at all times, an eating and drinking ban at KTVs, and using table dividers and maintaining a 1.5m distance between tables at board game or mahjong venues, the center said.

Separately yesterday, Taipei Mayor Ko Wen-je （柯文哲） said that given the city for the past 16 consecutive days has not reported any cases with an unclear source of infection, dine-in regulations are to be relaxed from today.

Dividers would no longer be required for friends or family members sharing a table, nor would they need to be seated at least 1.5m apart.