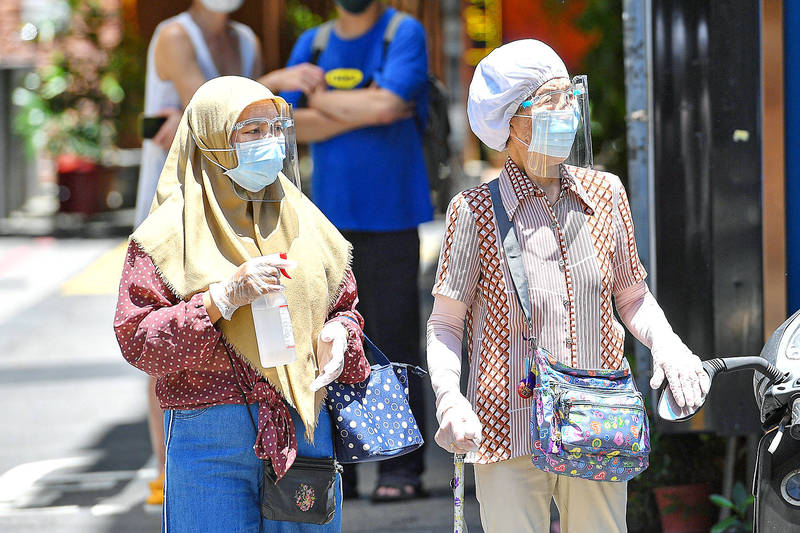 TOP THREE GROUPS: The Ministry of Transportation and Communications is to receive 10,000 of the 73,200 doses set aside, and the top three priority groups the remainder

Vaccination with the Moderna shot has been opened to the top three groups, said Minister of Health and Welfare Chen Shih-chung （陳時中）, who heads the center, adding that 73,200 doses have been set aside.

Of the 150,000 doses in the first Moderna shipment to Taiwan, about 75,000 doses limited to frontline workers, or the first priority group, were on Wednesday last week distributed to local governments.

As of yesterday, 37,505 people had gotten a Modern shot, CECC data showed.

Of the 73,200 doses, the Ministry of Transportation and Communications （MOTC） would receive 10,000, while the remaining doses would be distributed to cover those in the three groups who have yet to be vaccinated — about 40 percent nationwide, but more than 50 percent in Taipei and New Taipei City, he said.

The MOTC would use its doses to vaccinate designated groups of people in the second and third priority groups: 5,000 doses for crew members and aircraft maintenance workers employed by seven domestic commercial airlines, and 5,000 for frontline workers at airports and national borders, the center said.

The risk of infection remains high, including the risk of exposure to COVID-19 variants at points of entry into Taiwan, Chen said, emphasizing the importance of vaccinating these workers.

Asked if other Moderna shipments would soon arrive — as half of the first shipment has been set aside by the center as people’s second dose — Chen called it an “astute” question, saying that “of course preparations have been made.”

More than 140,000 doses of the AstraZeneca vaccine were administered on Monday — after the AstraZeneca shot was opened nationwide to the top six priority groups — which was “speedy administration” for the first day, Chen said.

The center is thankful to all local government officials, police officers, healthcare professionals and other personnel who helped in achieving such high efficiency, he said, adding that he is confident that once there is an adequate supply of vaccine doses, Taiwan can achieve the goal of administering up to 1 million doses per week.

The center has received one report of death following COVID-19 vaccination, said Centers for Disease Control Deputy Director-General Chuang Jen-hsiang （莊人祥）, who is the CECC spokesman.

On Monday, a man in his 80s visited a community vaccination center on his own and got inoculated, but family members found him on Tuesday afternoon not breathing, Chuang said.

The man had underlying health conditions — including diabetes, hypertension, chronic obstructive pulmonary disease, chronic hepatitis B, intracranial hemorrhage and coronary artery disease — and had been hospitalized for an acute myocardial infarction in January, he added.

While health department officials and a prosecutor have inspected the case, a forensic scientist was expected to visit the family yesterday, Chuang said.

Asked about two elderly people who died after getting vaccinated, which a local government reported yesterday, Chuang said that the center had not yet received the reports on the two cases.