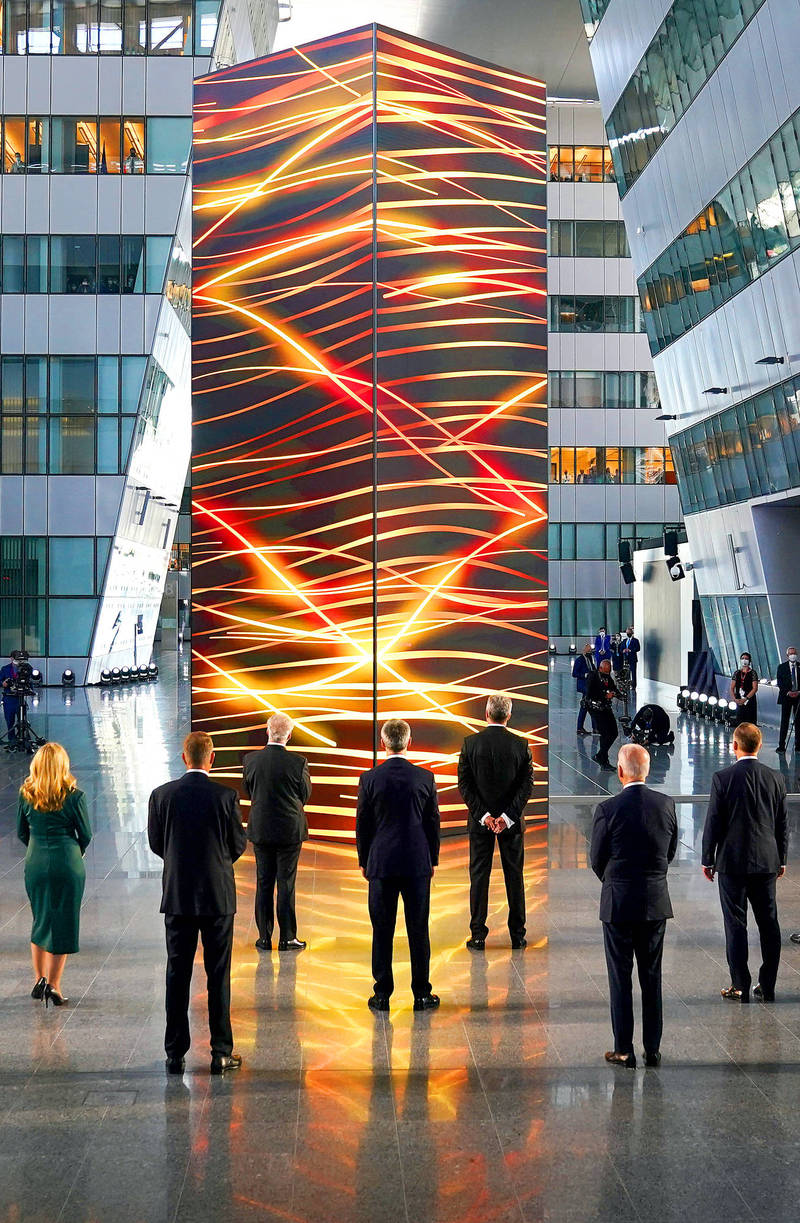 NATO heads of the states and governments pose for a family photo during the NATO summit at the alliance’s headquarters in Brussels yesterday. Photo: Reuters

NATO leaders were yesterday expected to agree that China presents a security risk, the first time that the traditionally Russia-focused military alliance would have asserted it needs to respond to Beijing’s growing power.

US National Security Adviser Jake Sullivan promised ahead of the meeting in Brussels that US President Joe Biden was attending that China “will feature in the communique in a more robust way than we’ve ever seen before.”

The senior White House official said NATO had a role in developing a shared military capability in response to China, “including in the nuclear sphere,” to engage in information sharing and act as a “forum for democratic values.”

According to a copy of the alliance’s final summit statement seen by Reuters, NATO leaders would say that “China’s stated ambitions and assertive behavior present systemic challenges to the rules-based international order and to areas relevant to alliance security.”

Biden wants to create international blocs of democratic nations to act as a counterweight to China’s authoritarian system and its fast-growing economic and military might, and the topic was also high on the agenda at the weekend’s G7 meeting.

“There is a growing recognition over the last couple years that we have new challenges,” Biden said in brief remarks made shortly after his arrival. “We have Russia, which is acting in a way that is not consistent with what we had hoped, and we have China.”

Other countries have highlighted the importance of striking a balance.

“I think when it comes to China, I don’t think anybody around the table today wants to descend into a new cold war,” British Prime Minister Boris Johnson said as he arrived at the gathering.

NATO Secretary-General Jens Stoltenberg said it was important to engage with Beijing “on issues like climate change, arms control,” but added that “China’s military buildup, growing influence and coercive behavior also pose some challenges to our security.”

G7 leaders criticized Beijing over human rights in its Xinjiang region, called for Hong Kong to keep a high degree of autonomy and demanded a full probe into the origins of COVID-19 in China.

The Chinese embassy in London said that such mentions of Taiwan, Xinjiang and Hong Kong distorted the facts and exposed the “sinister intentions of a few countries such as the United States.”

Stoltenberg also said the alliance’s relationship with Russia was at “its lowest point since the end of the Cold War,” blaming Moscow’s “aggressive actions” for the deterioration in relations.

Alliance members were hoping for a strong statement of support for NATO from Biden after several years in which then-US president Donald Trump dominated the summits, threatening to pull out of NATO in 2018 and storming home early in 2019.

“NATO is critically important for US interests in and of itself,” Biden said as he met Stoltenberg, describing NATO’s Article 5, under which an armed attack against one member is deemed an attack against them all, as “a sacred obligation.”

“I want NATO to know America is there,” he added.