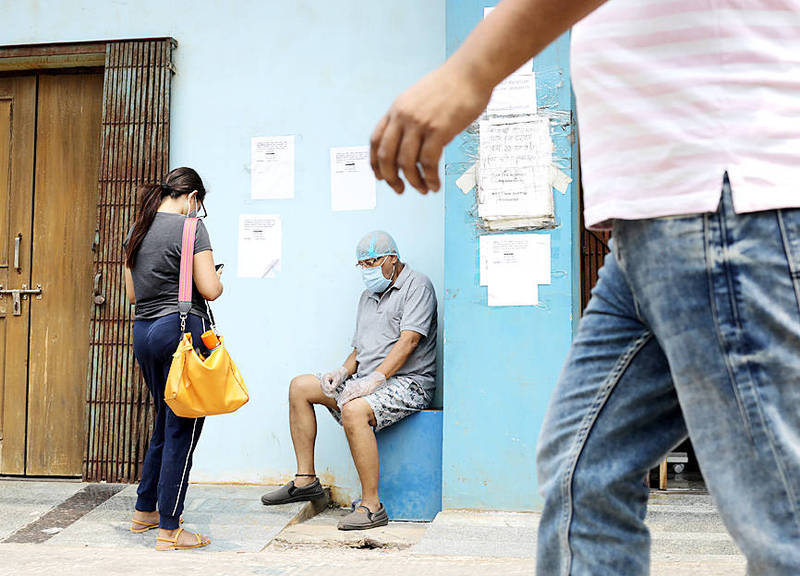 A suspected COVID-19 patient, sitting, waits to be admitted at a hospital in Kolkata, India, yesterday. Photo: EPA-EFE

India’s rampant second wave of COVID-19 yesterday topped 400,000 new daily cases for the first time, as the country opened up its massive vaccination drive to all adults, although several states warned of acute shortages.

Authorities reported 401,993 new cases in the previous 24 hours, the highest daily count globally, after 10 consecutive days of more than 300,000. Deaths from COVID-19 jumped by 3,523, taking the total toll in India to 211,853, Indian Ministry of Health and Family Welfare data showed.

The world’s biggest producer of COVID-19 vaccines has a limited number of shots available, worsening a surge in infections that has overwhelmed hospitals and morgues while families scramble for scarce medicines and oxygen.

West Bengal state was unable to start a vaccination drive for adults aged between 18 and 45 yesterday due to a shortage of shots, a senior state health official said, declining to be named as he was not authorized to speak with the media.

The chief minister of the hard-hit state of Delhi on Friday implored people not to line up at vaccination centers, promising more vaccines would arrive “tomorrow or the day after.”

Eastern Odisha state on Friday said it had received a consignment of 150,000 shots, but would only allow a few people to receive them due to lockdown restrictions preventing movement.

Desperate COVID-19 patients yesterday continued to arrive at hospitals, despite a shortage of beds.

Gasping for air, 62-year-old Vijay Gupta was turned away by Holy Family Hospital, a non-profit private facility in the south east of India’s capital, as all of its 385 beds were full.

Waiting outside the hospital, his family and friends debated what to do try next.

“We have been roaming around since 6am looking for a bed,” Gupta’s friend Rajkumar Khandelwal said. “Where shall we go?”

A fire in a hospital 185km south of Ahmedabad killed 16 COVID-19 patients and two staff.

The fire started at about midnight in the intensive care ward of the Patel Welfare Hospital, a designated COVID-19 facility, in Bharuch city.

“Preliminary investigation shows the fire was caused because of a short circuit,” said R.V. Chudasama, a superintendent of police in Bharuch.

Some experts have blamed mass religious gatherings and political rallies for the severity of India’s second wave, which caught the government unprepared.

A forum of scientific advisers set up by the administration of Indian Prime Minister Narendra Modi warned Indian officials in early March of a new and more contagious variant of the novel coronavirus taking hold in the country, five scientists who are part of the forum said.

Despite the warning, four of the scientists said that the federal government did not seek to impose major restrictions to contain the spread of the virus.

Meanwhile, Australian residents and citizens who have been in India within 14 days of the date they plan to return home would be banned from entering Australia as of tomorrow, government officials said.

The temporary emergency determination, issued late on Friday, is the first time Australia has made it a criminal offense for its citizens to return home.