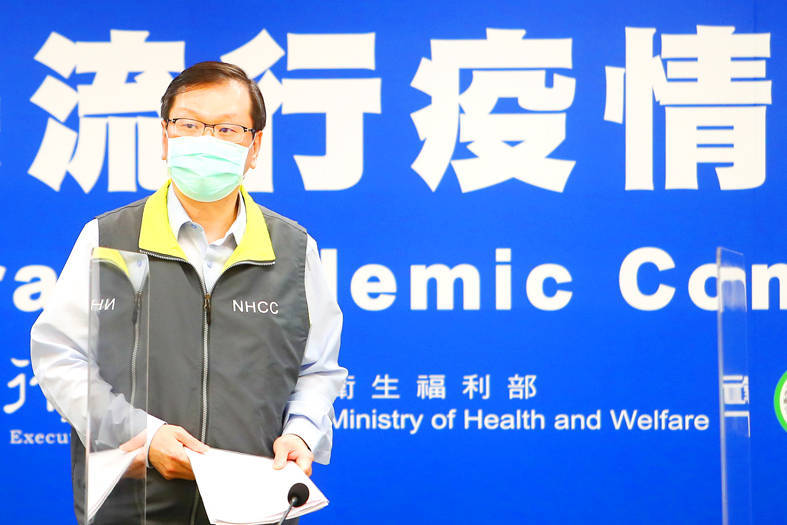 ADVERSE EVENTS: The center said that one man in his 60s experienced respiratory symptoms 16 days after vaccination, and is being treated in an intensive care unit

Two Taiwanese pilots have tested positive for COVID-19, while 3,802 people have made appointments for out-of-pocket vaccinations this week, the Central Epidemic Command Center （CECC） said yesterday.

The two men, in their 50s and 60s, who fly cargo planes for a local airline, tested positive on Monday evening, said Centers for Disease Control （CDC） Deputy Director-General Chuang Jen-hsiang （莊人祥）, who is the CECC’s spokesman.

The first man — case No. 1,078 — had flown a short-haul flight, departing and returning to Taiwan on Monday last week, and developed an itchy throat on Sunday, he said.

The other man — case No. 1,079 — had flown long-haul flights to India and Luxembourg between April 10 and Monday last week, he added.

On Wednesday last week, the two pilots and another crew member had flown on the same plane to the US, quarantined at a hotel during a layover and returned to Taiwan on Friday, Chuang said.

The CECC had eased the quarantine rules for flight crew members on Wednesday last week, so they needed to quarantine at home for only three days after their return and took a mandatory polymerase chain reaction （PCR） test on the third day, he said.

The PCR test results returned positive for the two pilots, but negative for the crew member, who is now isolating at home, he said.

Authorities are investigating the source of infection to determine whether they were infected abroad or on the plane, he added.

Reporting on the progress of vaccination in the nation, Chuang said that as of Monday, 33,404 people had received their first shot of the AstraZeneca vaccine.

Four adverse vaccine events were reported on Monday. One involved a man in his 60s who experienced respiratory symptoms 16 days after vaccination, and was diagnosed with vasculitis and interstitial pneumonia.

The man is being treated in an intensive care unit, Chuang said.

“The symptoms are unlike the adverse events reported in other countries after AstraZeneca vaccinations, which involved blood clots,” he said, adding that the case would be discussed at a specialist meeting today.

As of Monday afternoon, 3,802 people had booked appointments for self-pay vaccinations for this week, Chuang said.

He also clarified a remark he made on Monday, saying that the 10,000 vaccine doses set aside for self-pay jabs would be offered as the first shot to 10,000 people, rather than the first and second shots for 5,000 people.

More doses might be released if there is sufficient supply, he said.