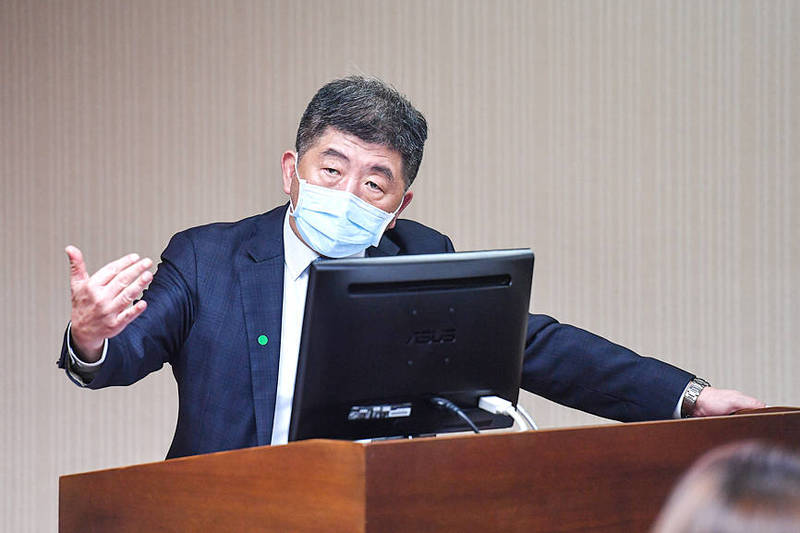 Minister of Health and Welfare Chen Shih-chung speaks at a news conference at the Legislative Yuan yesterday about plans to distribute donations to the victims of the Taroko Express derailment. Photo: CNA

DELICATE HISTORY: Citing the handling of a fund for donations after the 2014 Kaohsiung gas explosion, a legislator called for rules regulating such enterprises

A plan to distribute public donations for the victims of the Taroko Express No. 408 train derailment is to be finalized next week, Minister of Health and Welfare Chen Shih-chung （陳時中） said yesterday.

The ministry would also within three months propose changes to regulations on government-led donation campaigns for major accidents to set better standards for the process, he said.

Chen made the remarks at the Legislative Yuan while reporting on the management of a special disaster relief account to accept donations for the “0402 Taroko Express Accident Case,” set up by the ministry on April 3, the day after the derailment.

He also discussed the committee that was created to oversee the fund’s distribution.

After the committee’s second meeting on Friday last week, Chen announced that the families of the 49 people who died could each receive NT$15 million from the fund, while about NT$120 million would go toward a trust fund to cover the education costs of students injured in the crash and the children of parents who died.

Social workers are collecting opinions from the passengers and the families of the victims about the plan, and a finalized version is expected to be released next week, he said yesterday.

Addressing questions about why the ministry established the donation account, Chen said that it did not create the idea, but “stepped in” to handle it after receiving numerous inquiries about how to donate and hearing that people wanted the ministry to ensure that donations are fairly distributed.

According to Charity Donations Destined For Social Welfare Funds Implementation Regulations （公益勸募條例）, government agencies can run fundraising campaigns after major disasters, he said, adding that there were precedents, such as the Kaohsiung gas explosions in 2014 and a dust explosion at the Formosa Fun Coast （八仙海岸） water park in New Taipei City in 2015.

Taiwan People’s Party Legislator Lai Hsiang-lin （賴香伶） said that the distribution of public donations to the victims of the Kaohsiung gas explosion was controversial.

The establishment of donation accounts run by the government, as well as the use and supervision of such funds, should be clearly stipulated by the law, Lai said.

Such funds should be regulated based on the type of disaster, Democratic Progressive Party Legislator Su Chiao-hui （蘇巧慧） said, adding that the government should “passively” step in to collect and manage the donations, and the donations should only be used for the people affected by the accident.

The distribution of public donations would be monitored by the Legislative Yuan, government audit agencies, the Executive Yuan and the Control Yuan, Chen said, adding that the ministry would propose changes to regulations to institutionalize government-led donation campaigns.