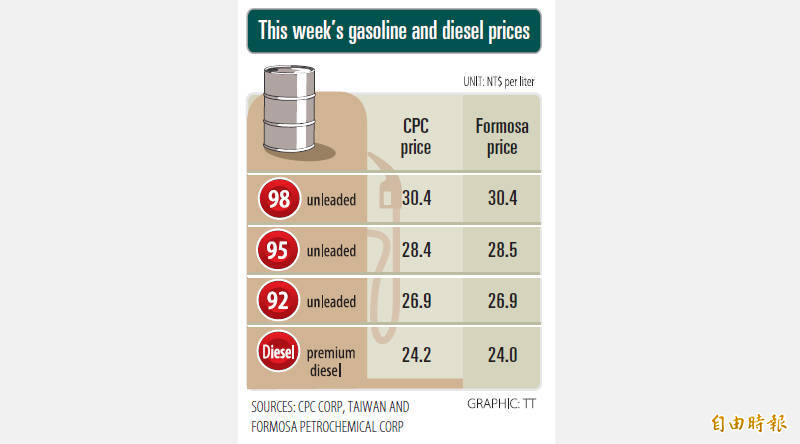 CPC Corp, Taiwan （CPC, 台灣中油） and Formosa Petrochemical Corp （台塑石化） yesterday announced that they would raise gasoline prices by NT$0.4 per liter this week after they cut prices by NT$0.3 per liter last week.

However, the companies said that they would keep diesel prices unchanged, following a NT$0.1 increase last week.

Effective today, gasoline prices at CPC stations are to increase to NT$26.9, NT$28.4 and NT$30.4 per liter for 92, 95 and 98-octane unleaded gasoline respectively, while the price of premium diesel is to stay at NT$24.2 per liter, the state-run refiner said.

Formosa said that the prices of 92, 95 and 98-octane unleaded gasoline at its stations would increase to NT$26.9, NT$28.5 and NT$30.4 per liter respectively, while the price of premium diesel would remain at NT$24 per liter.

A greater-than-expected fall in US crude oil inventories also contributed to the rise in international oil prices last week, it said.

《TAIPEI TIMES》 US presses Taiwan for more a…