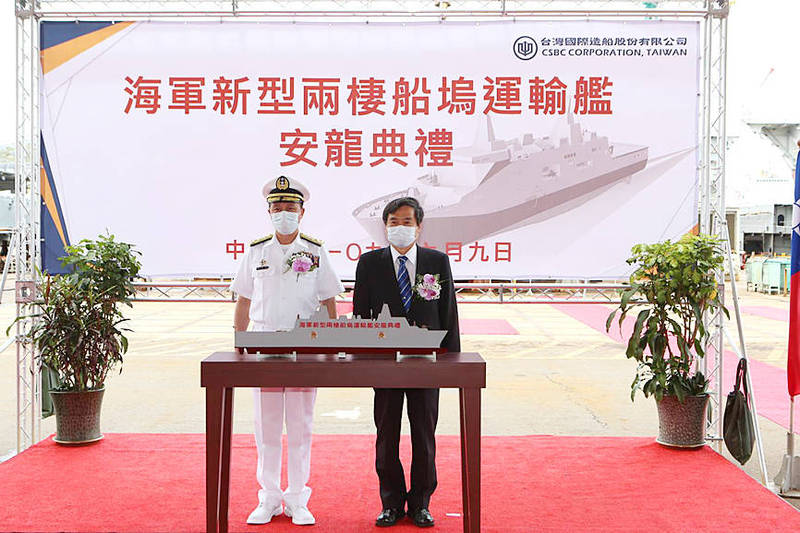 The navy’s new 10,600-tonne warship is on Tuesday to be christened the ROCN Yushan （玉山）, as the nation’s indigenous shipbuilding program reaches a milestone, sources said yesterday.

The vessel, previously referred to as the “new landing platform dock,” was at a shipyard with its name freshly painted on the hull with the number 1401, the Liberty Times （the sister paper of the Taipei Times） reported yesterday, citing an unnamed observer.

The NT$4.635 billion （US$163 million） ship is designed to meet operational requirements for amphibious assault and personnel and materiel transport, as well as disaster prevention, relief and humanitarian aid, the Navy Command Headquarters said.

The ship is armed with an OTO Melara 76mm gun, two Tien Chien-2N air-defense missile systems and two Phalanx close-in weapon systems. The superstructure is designed to reduce its radar signature and enclose its twin masts.

The ship can also be modified to be used as a field hospital.

It is expected to be put into operation next year, the navy said.

CSBC had met all relevant project milestones since the ship’s construction started in May 2019, Commander of the Navy Admiral Liu Chih-pin （劉志斌） said at an event marking the ship’s mast stepping on March 18.

The navy has full confidence that CSBC and the Chungshan Institute of Science and Technology will continue their smooth cooperation to deliver the ship, he said.

The Ministry of National Defense is to lay the indigenous submarine’s keel, deliver the Ta Chiang （塔江） missile corvette and three minelayers, and begin building a new patrol rescue vessel before the end of the year, it said in a legislative report dated March 15.