《TAIPEI TIMES》 US encourages Taiwan to invest in defense: official 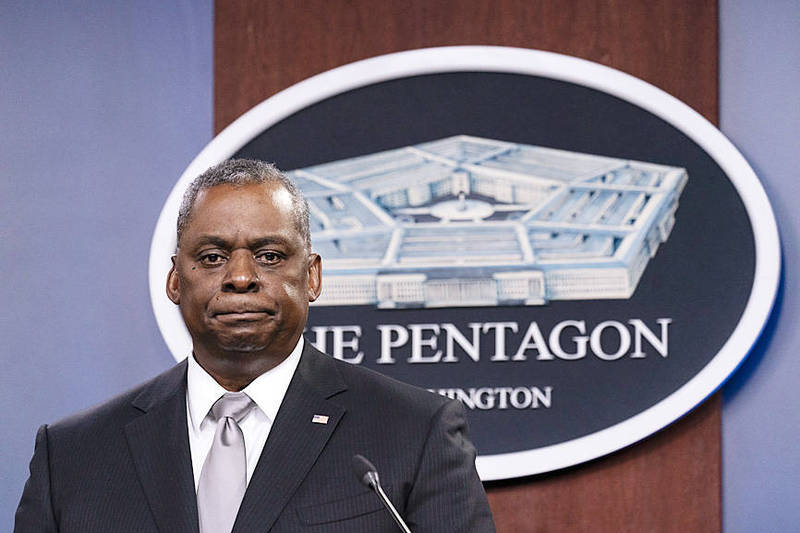 US Secretary of Defense Lloyd Austin listens to a question at a media briefing at the Pentagon in Virginia on Feb. 19. Photo: AP

MAIN CHALLENGE: The US naval commander warned that China would seek to ‘forcibly change’ the balance of power in the region that would likely be permanent

The US encourages Taiwan to invest in defense and obtain asymmetric defense capabilities, US Navy Admiral Philip Davidson said on Thursday.

Davidson, commander of the US Indo-Pacific Command, made the remark in a videoconference on defense matters hosted by the American Enterprise Institute think tank.

“China is positioned to achieve overmatch” in its military capability by 2026, he said.

When Beijing is able to, it would “likely choose to forcibly change” the balance of power in the Indo-Pacific region, “and I would say the change in that status quo could be permanent,” he said.

“China seeks a new world order, one with Chinese characteristics, as they often said, where Chinese national power is more important than international law,” he added.

In response to questions, Davidson said that China has stepped up activities with military aircraft and warships around Taiwan, including intrusions into Taiwan’s air defense identification zone and coast guard vessels near the Diaoyutai Islands （釣魚台）.

It is crucial for the US to assist and encourage Taiwan to invest in national defense with an emphasis on obtaining defense capabilities and the means to deter an attack, in addition to arms sales and assisting Taiwan in making a strategy of deterrence a reality, he said.

Meanwhile, writing in a document entitled “Memorandum for All Department of Defense Employees,” US Secretary of Defense Lloyd Austin on Thursday named China as the “pacing challenge” to US national security.

Highlighting challenges confronting the US, Austin said that department officials and employees must deal with the “proximate” hurdles stemming from the COVID-19 pandemic and China.

Other priorities for the department were to address advanced and persistent threats posed by Russia, North Korea and Iran, and by extremist groups in the Middle East, Africa, and south and central Asia; to modernize the department; and to tackle the climate crisis.

“The department will prioritize China as our No. 1 pacing challenge and develop the right operational concepts, capabilities and plans to bolster deterrence and maintain our competitive advantage,” he said.

“We will ensure that our approach toward China is coordinated and synchronized across the enterprise to advance our priorities, integrated into domestic and foreign policy in a whole-of-government strategy, strengthened by our alliances and partnerships, and supported on a bipartisan basis in Congress,” he added.