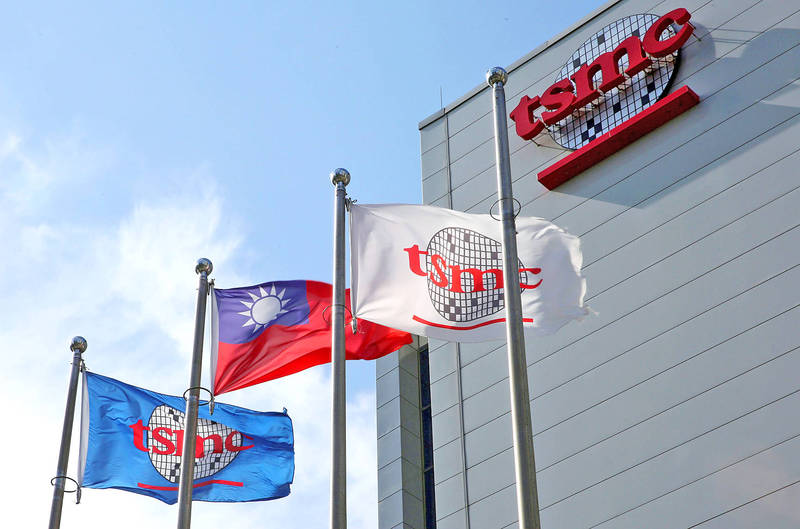 The flags of Taiwan and Taiwan Semiconductor Manufacturing Co fly next to the company’s headquarters in Hsinchu City on Oct. 5, 2017. Photo: Reuters

RECORD BUDGET: TSMC does plan to raise its proposed capital expenditure a lot, and could benefit if Intel outsources more of its production to foundries, analysts said

“TSMC stands to benefit if Intel outsources more of its fabrication to foundries,” SinoPac Securities Investment Service Corp （永豐投顧） analysts said in a note on Friday.

Yuanta Securities Investment Consulting Co （元大投顧） was more cautious, saying that Intel’s contribution initially would be limited, but its outsourcing plans would still highlight TSMC’s leadership in technology, it added.

“Intel will continue to manufacture server or high-end central processing units [CPUs], which have higher margins and contain more key technology,” Yuanta analysts said in a separate note on Friday.

However, Intel would outsource lower-end CPUs or discrete graphics processing units （GPUs） to foundries, they said.

At its earnings conference on Thursday last week, TSMC announced that it would substantially raise its proposed capital expenditure to US$25 billion to US$28 billion this year, grabbing the attention of market watchers.

The announcement came amid a surge in demand for semiconductors, and ahead of Intel’s anticipated outsourcing news.

TSMC said that it would allocate most of its spending on advanced process technologies, including 3, 5 and 7-nanometer technologies — because of the multiyear trend of 5G and high-performance computing-related applications — and support its customer’s capacity needs.

Analysts said that TSMC’s capital expenditure budget for this year is far above the record-high US$17.2 billion in spending allocated last year, and also significantly higher than market predictions of US$20 billion to US$22 billion.

The company’s massive spending plans could help alleviate some industry concerns about a shortage of semiconductors, as GPUs, automotive semiconductors and application processors have been in short supply recently, analysts said.

An increase in PC gaming due to people staying at home more during the COVID-19 pandemic and in demand for cryptocurrency mining have aggravated the shortage of GPU products.

Last week, chip designer Nvidia Corp said that GPU supply is very tight, and the situation is likely to persist until April, foreign media have reported.

Meanwhile, auto demand recovered in the second half of last year, but a lack of capacity has made it impossible for foundry firms to rapidly ramp up production of automotive semiconductors, NH Investment & Securities Co said, adding that the problem might remain unresolved through the first half of this year.