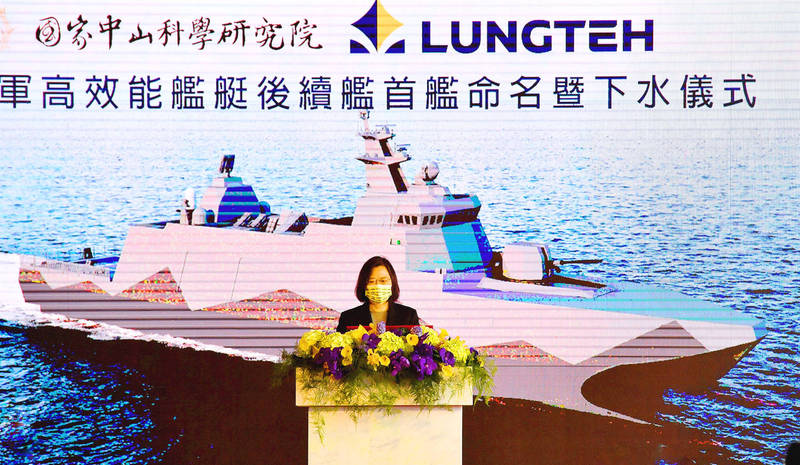 DEVELOPMENT: Taiwan has the determination and capability to build its own ships, the president said, adding that it could also export military components

Tsai has made boosting the defense of the nation a priority in the face of a growing military challenge from Beijing, which has never renounced the use of force to bring Taiwan under its control.

While the nation’s air force has benefited from big-ticket imported items such as new and upgraded F-16s, the navy is Tsai’s next focus, with submarines in production and the first of a fleet of highly maneuverable stealth corvettes launched yesterday.

The new Tuo Chiang-class corvettes, a prototype of which is already in operation, have been dubbed “aircraft carrier killers” by the navy, due to their complement of anti-ship missiles. They can also carry Sky Sword anti-aircraft missiles.

In a speech at Lung Teh Shipbuilding Co’s （龍德造船） shipyard in Yilan County’s Suao Township （蘇澳）, Tsai said Taiwan is beginning to see the results of her administration’s policy of pursuing self-sufficiency in national defense capability.

A long series of developments, including the start of construction on a domestic submarine and the handover of new patrol ships and minelayers, show that indigenous defense manufacturing is making “thorough and comprehensive” progress, Tsai said.

During her speech marking the launch of the Ta Chiang （塔江艦） — the first mass-produced Tuo Chiang-class ship — Tsai said the vessel, as well as a new minelayer developed for the navy, would deter attacks and showcase Taiwan’s research and development ability.

“We have the determination and capability to complete the task of building our own ships, letting the world see our defense research and development energy,” Tsai said.

The Ta Chiang’s name contains a reference to the Tawa River （塔瓦溪） in Taitung County, which forms the ancestral hunting grounds of the Paiwan people, while also alluding to the vessel’s symbolic role as a “tower” （塔） on the front line of the nation’s defense, the navy said.

The minelayer has a maximum speed of 14 knots （26kph） and a displacement of 347 tonnes.

It is equipped with a T-75 20mm cannon and T-74 machine guns, as well as a domestically developed minelaying system, the navy said.

“In the future, we might also become a supply source of related equipment and components in Western democracies, driving the upgrading of the defense industry,” Tsai said.

The US is Taiwan’s main foreign source of weapons. Most countries shy away from arming Taiwan, wary of angering Beijing and losing valuable commercial contracts with the world’s second-largest economy.

Tsai, re-elected by a landslide in January on a vow to stand up to China, has championed the concept of “asymmetric warfare,” focusing on high-tech, mobile weapons designed to make any Chinese attack as difficult as possible.

She has bolstered the domestic arms industry to try to make Taiwan as self-sufficient as possible.