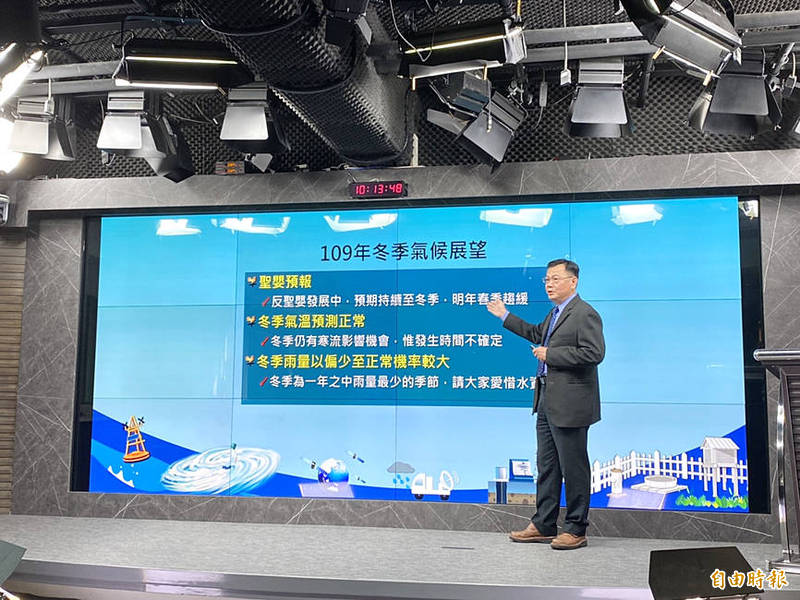 NON-TYPICAL: Apart from Atsani, storms in autumn missed Taiwan, rainfall has been lower and average temperatures have been higher, a CWB forecaster said

The current water shortage is expected to worsen in the next few months, with the Central Weather Bureau （CWB） yesterday forecasting a colder, dryer winter than normal.

With winter starting next week, the bureau at a media briefing outlined the expected conditions through February and reviewed autumn’s significant weather events.

First, 13 tropical storms and typhoons formed from September to this month, up from 11 in the same period last year, Lu said.

Apart from Atsani, for which sea and land alerts were issued in Taiwan, the tropical storms and typhoons this autumn generally moved toward Japan or South Korea, or moved over the South China Sea, he said.

However, rainfall increased more than 40 percent compared with autumn last year, he said.

Rain came from frontal systems, clouds in the circumfluence of typhoons or tropical storms, and the northeast monsoon, he said.

Most of the rain fell in Taiwan’s northeast, which had significantly more rainfall than the west coast, he said.

The average in Chiayi County’s Alishan Township （阿里山） was the fifth-lowest since the station there was established, while stations in Taipei, New Taipei City’s Tamsui District （淡水）, Hsinchu, Chiayi City, Taichung’s Wuci District （梧棲） and Taitung’s Chengkung Township （成功） are also reporting low autumn rainfall, which might make top 10 lists for dry years at each station, he said.

“The only months this year that had higher than average rainfall were May and August, while June, July and September had significantly less than average,” he said. “The average rainfall from June to this month was 902.5mm, or about 60 percent of the same period last year and the lowest since 1993.”

The rainy season in Taiwan ended earlier than usual this year, with no tropical storm or typhoons approaching the nation in July, Lu said.

Taiwan had similar conditions in 2014, when no tropical storm or typhoon made landfall in August.

Average rainfall from next month to February is expected to be from slightly below average to normal, he said.

Due to La Nina effect, the average temperature in the three months would be lower than normal, Lu said.

Next month, the average temperature would be warmer than usual, while January would be colder than normal, he said, adding that no forecast was available for February.

Taiwan can expect about 6.6 days that are affected by cold waves this winter, he said.

La Nina is expected to gradually ease as spring arrives, he said.