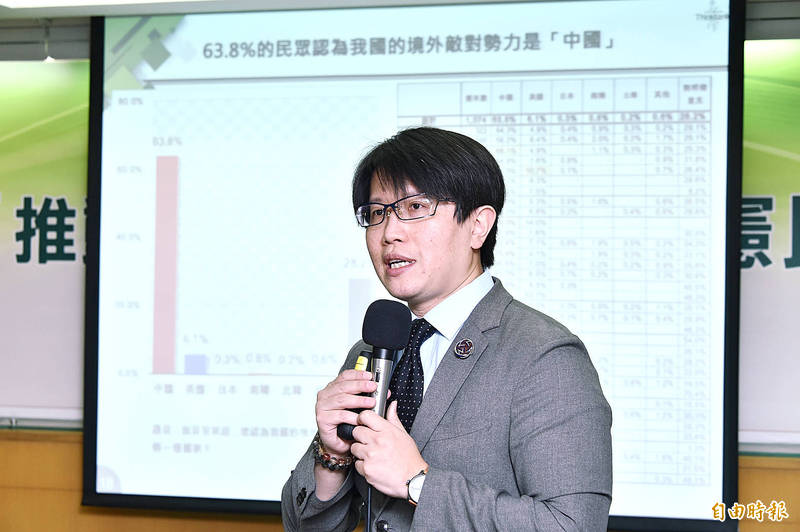 Only 2 percent of respondents to a poll on constitutional amendments and national identity identified as Chinese, while 62.6 percent identified as Taiwanese, the Taiwan Thinktank said yesterday.

Legislators have proposed amendments to the Additional Articles of the Constitution （憲法增修條文）, which would change the definition of the nation’s territory, remove the Taiwan Provincial Government as an entity, prioritize the use of “Taiwan” for national groups at international events, and remove restrictions on defining the national emblem, national flag and national anthem.

The poll showed that 80.5 percent of respondents agreed that the nation should participate as “Taiwan” at events organized by world bodies, while 12 percent disagreed.

If they were forced to choose between Taiwanese and Chinese, 86 percent chose Taiwanese and 6.3 percent selected Chinese, while 1.1 percent adamantly maintained that they are both.

When asked what name the nation should use at global events, 51.2 percent of respondents said “Taiwan,” while 33 percent said the “Republic of China,” 9.7 percent said “Chinese Taipei” （中華台北）, 0.6 percent said “Zhongguo Taibei” （中國台北）, and 2 percent said “Separate Customs Territory of Taiwan, Penghu, Kinmen, and Matsu,” while 0.1 percent said other names, 2.9 percent said they did not know or had no opinion, and 0.5 percent refused to answer.

In 2008, China used “Zhongguo Taibei” instead of “Chinese Taipei,” saying that there was no difference between them in Chinese.

To join the WTO in 2002, Taiwan used the name “Separate Customs Territory of Taiwan, Penghu, Kinmen and Matsu.”

Most Taiwanese aged 30 and younger view international affairs from the perspective of Taiwan being an independent political entity, a consensus that the proposed amendments to the act could harness, Doong said.

The poll showed that 82.1 percent of respondents agreed that the phrase “according to its existing national boundaries” could be changed to “the areas of Taiwan, Penghu, Kinmen and Matsu where the Constitution is observed,” while 5.2 percent did not agree.

However, most of the respondents agreed that the national territory did not include territory being administered by the People’s Republic of China.

Regarding the Taiwan Provincial Government, 68.8 percent of respondents saw no reason to keep it, while 18.5 percent supported its continuation.

The provincial government was set up in 1947, but declined after “province” was removed as a governmental tier in 1997. Despite being effectively disbanded, it cannot be officially removed without a constitutional amendment.

The results showed that 69.2 percent of respondents agreed that the Constitution should say more about Taiwan’s information technology and other high-tech industries, given that autocratic countries are seeking to infiltrate them and influence their development.

The poll, conducted from Tuesday to Thursday last week, collected 1,074 valid telephone interviews with people aged 18 and older, and has a confidence level of 95 percent and a margin of error of plus or minus-3 percentage points.