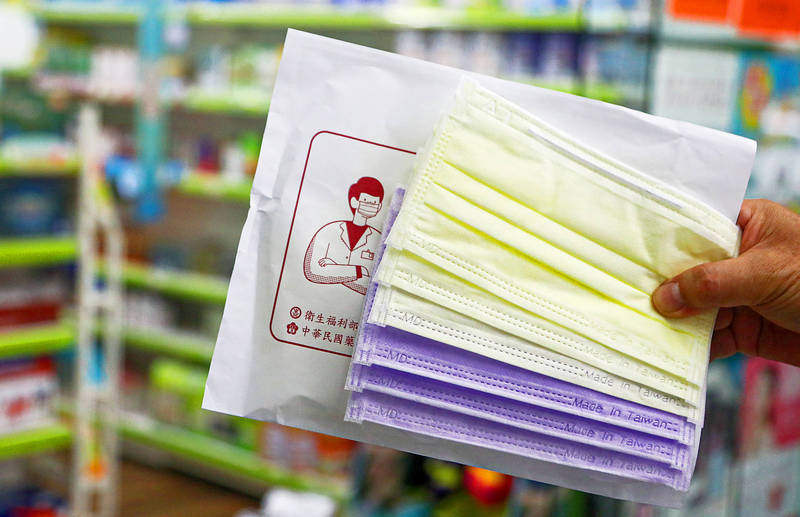 A person holds up “Made in Taiwan” masks in Taipei yesterday. Photo: CNA

Four companies have become embroiled in an investigation of alleged business fraud as authorities searching factories in central Taiwan have since June found 1.2 million masks imported from China and repackaged as “Made in Taiwan.”

From business receipts and other documents, prosecutors said that about 1.2 million imported and falsely labeled masks were sold at local pharmacies and other shops at an estimated NT$4.4 million.

The owners are to be charged with fraud, they said.

Chong Kuang Co in June imported 5.5 million non-medical-grade masks from China, but as Lin only had a sales license, he made a deal with Lih Yow Enterprise to “borrow” its manufacturing license, prosecutors said.

Under this arrangement, Lin presented the China-made masks as medical-grade masks that were “Made in Taiwan” by Lih Yow Enterprise, they added.

Transaction records showed that Lin sold about 200,000 of the masks to Income Co, which in turn repackaged them as being “Made in Taiwan” under the “Polar Bear” brand, which belongs to the Kaohsiung-based Ryh Sheng Medical Supplies Co （日昇醫療器材）, they said, adding that Ryh Sheng is part of the national alliance of mask manufacturers and has a good reputation.

The probe found that Chong Kuang Co sold about 1 million China-made masks as “Made in Taiwan” under its “Chong Kuang” brand.

In related news, a father and son duo surnamed Hsu （許）, owners of the Kaohsiung-based Jingxin Technology Co （淨新科技）, were questioned by investigators after allegedly setting up an extra production line for medical-grade masks.

Jingxin Technology Co is a national alliance member, but the pair set up the additional production line at an off-site location, which is not licensed, the Ciaotou District Prosecutors’ Office said, adding that the machines were discovered during a raid on Tuesday.

The father was released on bail of NT$300,000 and the son on bail of NT$200,000, prosecutors said, adding that they are expected to be charged with breaches of the Pharmaceutical Affairs Act （藥事法）.