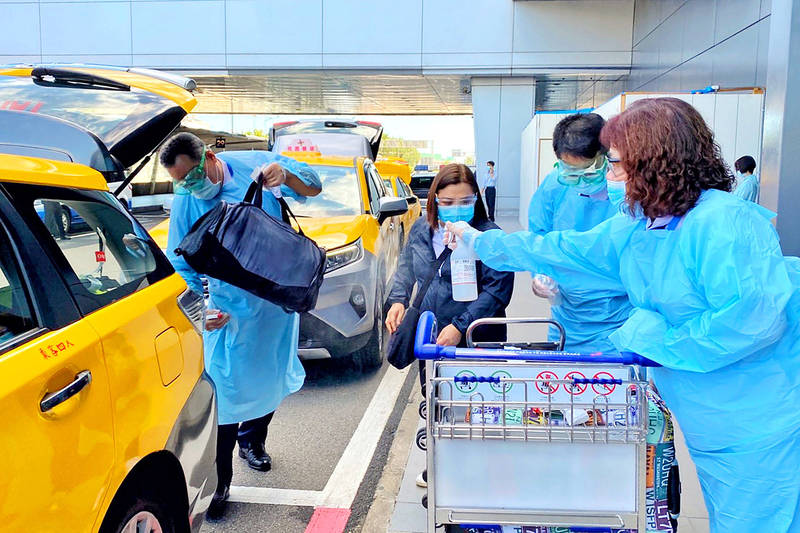 An airport staff member on Aug. 12 sprays disinfectant on a person leaving Taiwan Taoyuan International Airport as she prepares to take a taxi to where she is to be quarantined. Photo: CNA

POSITIVE RESULT: While the policy of testing all travelers from the Philippines has been debated, the CECC said that a woman from the country was Taiwan’s 507th case

The Central Epidemic Command Center’s （CECC） specialist advisory panel is considering whether the policy of testing all travelers from the Philippines for COVID-19 should continue to be implemented, center spokesman Chuang Jen-hsiang （莊人祥） said yesterday.

The panel last week discussed the issue, but the conclusion it reached has not yet been approved, said Chuang, who is also the deputy director-general of the Centers for Disease Control.

Although the number of daily confirmed cases reported in the Philippines has dropped from as many as 6,000 cases a day during a previous peak period to about 3,000 to 4,000 cases per day, the figure has remained constant for a while, showing that the reduction in case numbers is slow, he said.

So far the CECC has no plans to test all travelers from other countries, he added.

While approximately 300,000 confirmed cases worldwide were reported daily in the past few days, the Philippines’ daily figure is still relatively high, he said, adding that the test positivity rate in the Philippines has recently been about 11 percent.

The new case is a Filipino in her 30s, who arrived in Taiwan from the Philippines for work on Friday, Chuang said.

The woman showed no symptoms upon arrival, but she was routinely tested for COVID-19 and taken to a centralized quarantine facility, he said, adding that the result came back positive yesterday, so she was hospitalized, although she is asymptomatic.

Twenty-three of the woman’s close contacts have been identified, including nine passengers who sat close to her on the flight to Taiwan, who have been placed under home isolation, and 14 flight crew members, who must practice self-health management, he said.

Among the nation’s 507 confirmed cases, seven people have died, 479 people have been released from isolation and 21 are in hospital, the CECC said.

According to WHO data, more than 30.37 million people worldwide have been diagnosed with COVID-19 and more than 948,000 people have died, while more than 312,000 confirmed cases were reported on Saturday alone, Chuang said.