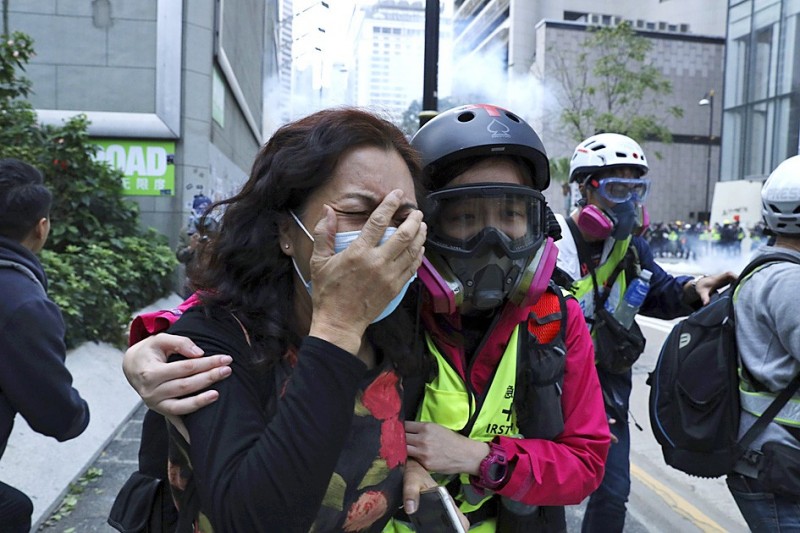 A woman cries yesterday as she pleads with Hong Kong police not to beat a man as police detain protesters calling for electoral reforms and a boycott of the Chinese Communist Party. Photo: AP

Clashes yesterday broke out between protesters and police in Hong Kong, cutting short a rally after thousands had gathered at a park on Hong Kong Island to call for electoral reforms and a boycott of the Chinese Communist Party.

Police fired tear gas near Chater Garden, not far from the Legislative Council, after some protesters attacked plainclothes officers.

Radio Television HK cited fellow organizers as saying that Lau was arrested for allegedly violating the police’s conditions for the rally.

Earlier in the day, Lau said he believes more large-scale protests are needed for global attention to return to Hong Kong, adding: “I think Hong Kong has not been the focus of the world anymore.”

He urged countries to launch sanctions against Hong Kong’s government if it does not allow residents to directly elect Legislative Council members this year.

In response to the rally, Hong Kong’s government released a statement outlining the “universal suffrage of ‘one person, one vote’ as an ultimate aim” enshrined in the territory’s Basic Law.

This step must be implemented in line with “gradual and orderly progress,” the statement said.

“The government understands the aspiration of the community for universal suffrage,” it added. “To achieve this aim, the community needs to have a clear understanding that apart from being accountable to [Hong Kong], the CE [chief executive] selected by universal suffrage is appointed by the Central People’s Government [CPG] and shall also be accountable to the CPG.”