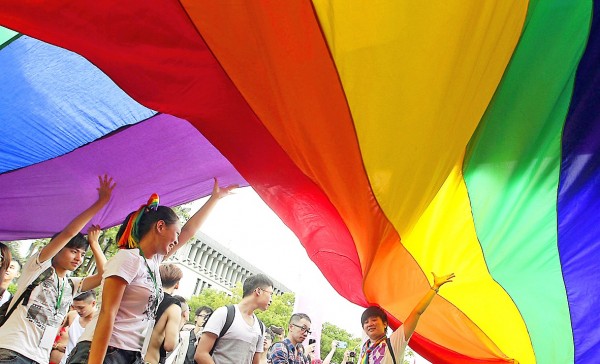 Gay marriage advocates are calling for the central government to take steps to recognize same-sex relationships after the Taipei City Government on Wednesday became the second city in the nation to accept household registrations of same-sex partnerships.

Lu Hsin-chieh （呂欣潔）, a candidate for the newly founded Social Democratic Party （Taiwan） in next year’s legislative election, called on the Legislative Yuan and the Ministry of Justice to recognize that with two local governments accepting registrations of same-sex partnerships, they are no longer taboo in Taiwanese society.

The social activist added that a survey on changing attitudes toward homosexuality and same-sex marriage released by the Institute of Sociology of Academia Sinica last year indicates that Taiwanese society is ready to accept a same-sex marriage law.

While the local government registration is deemed in general as bearing more symbolic meaning than substantial benefits to same-sex couples, Lu suggested that the Taipei City Government include the household registration data in the National Health Insurance （NHI） data system, so that in the event of emergency surgery, a patient’s same-sex partner can sign a letter of consent.

She also proposed that the Taipei and Kaohsiung city governments set a precedent by entitling same-sex partners of their employees the rights and benefits of civil servant spouses.

Miao Bo-ya （苗博雅）, another Social Democratic Party legislative candidate, said that despite household registration not being legally binding, same-sex partners can at least present it as proof of a close relationship in case of complicated legal disputes.

A lesbian herself, Miao said that she and her partner might register their relationship to judge the move’s effectiveness.