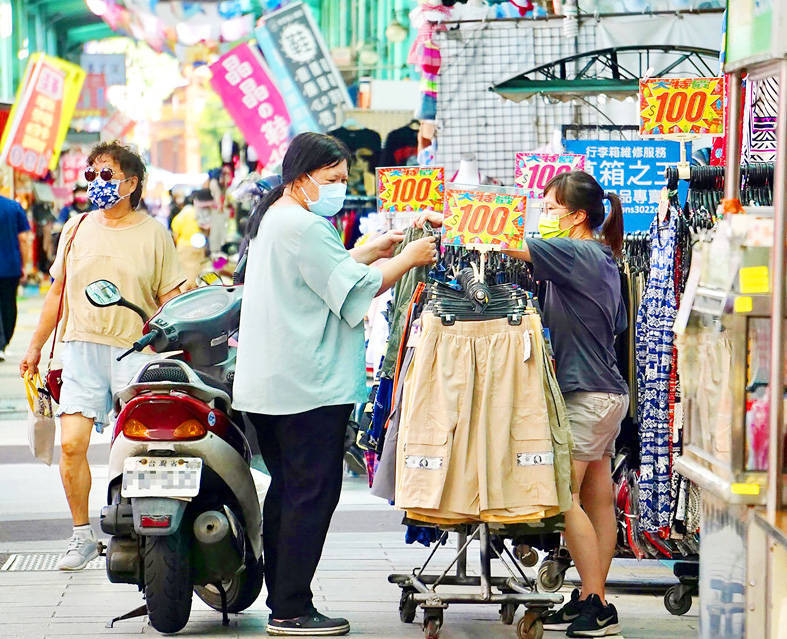 FOOD AND FUEL PRICES: Average household spending increased by NT$2,872 per month, the DGBAS said as it predicted the trend to gradually slow down

The consumer price index （CPI） last month accelerated 3.59 percent from a year earlier, the fastest advance in 14 years, as almost all consumer item prices increased, led by food and fuel, the Directorate-General of Budget, Accounting and Statistics （DGBAS） said yesterday.

It is the fourth straight month the inflationary gauge climbed more than 3 percent, steeper than the central bank’s 2 percent target.

“The pace of consumer price hikes could slow this month, although they will remain above 3 percent, in the absence of bad weather such as typhoons to disrupt vegetable and fruit supply,” Tsao said, adding that international commodity and oil prices have shown signs of stabilization.

The index after seasonal adjustments increased 0.11 percent, the statistics agency said in a monthly report.

Food costs, which account for 25 percent of the index, inflated 7.27 percent after suppliers raised egg and meat prices by 29.11 percent and 6.78 percent respectively to reflect increased feed costs, Tsao said.

Unfavorable weather conditions weighed on fruit supply and drove up their prices by 25.31 percent from a year earlier, he said.

The cost for transportation and communications gained 3.54 percent last month as a 7.86 percent increase in oil prices was offset by a 4.99 percent decline in telecommunications charges, the agency said.

Living costs picked up 3.36 percent due mainly to the introduction of new electricity rates on Friday, even though they only affected industrial users, but spared households, Tsao said.

The wholesale price index （WPI）, a measure of commercial production costs, advanced 16.45 percent year-on-year last month, slightly losing momentum from the record increase of 16.97 percent in May, the report showed.

In the first half of this year, the CPI increased 3.13 percent and the WPI expanded 14.48 percent from the same period last year, the report said.