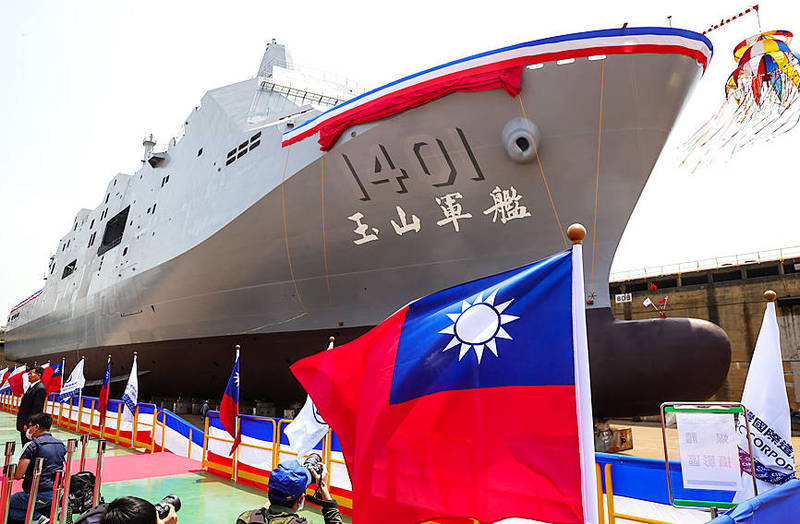 The domestically built Yushan landing platform dock is pictured in Kaohsiung during its christening ceremony on April 13 last year.Photo: CNA

A Taiwan-made Yushan landing platform dock （LPD） is scheduled to be delivered to the navy as early as September if its soon-to-be-launched sea trial proves to be a success, a military source said yesterday.

The 10,600-tonne amphibious multimission vessel is currently docked at a military port undergoing tests to make sure all the newly installed systems work smoothly, the source said, without naming the port.

After completing the static tests, the vessel would then conduct a sea trial to make sure the domestically built LPD can operate safely, the source added.

If the sea trial is successful, the vessel could be delivered to the navy in September at the earliest, the source said.

The source also confirmed a report yesterday by the Chinese-language Liberty Times （the sister paper of the Taipei Times） which gave an update on the status of the domestic LPD program.

Christened and launched in April last year, the Yushan is the first of four indigenous LPDs being built by local shipbuilder CSBC Corp, Taiwan （台船） for the navy, but it has yet to be handed over to the military as testing continues.

Once in service, the Yushan, named after Taiwan’s highest peak, would replace the Hsu Hai dock landing ship, which first entered into service with the US Navy as the USS Pensacola in 1971, before being transferred to Taiwan in 1999.

The ship has two hangars able to accommodate helicopters.

It would be responsible for transporting supplies and personnel to the nation’s outlying islands, as well as joining humanitarian assistance missions in emergencies, the military said.