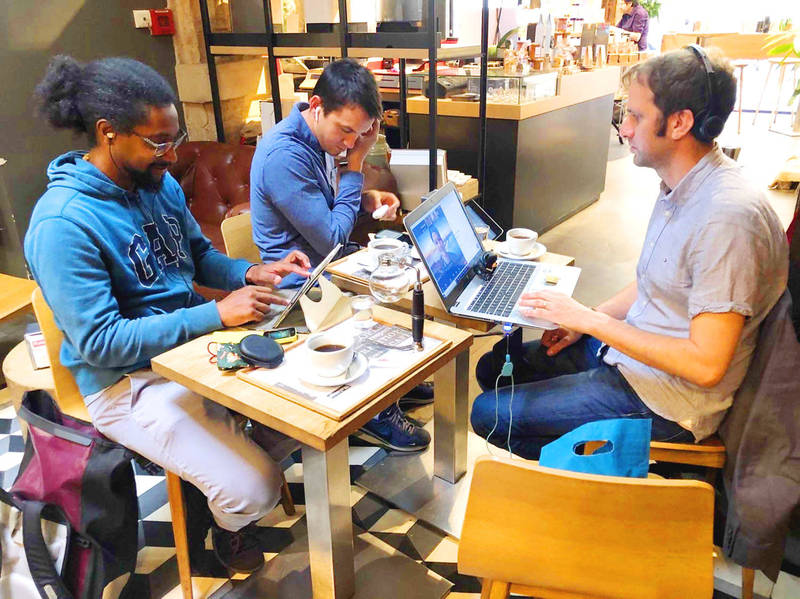 Students sit together in a cafe in Paris on June 25 to watch an online presentation marking the end of their Hoklo language course. Photo: CNA

The Hoklo （commonly known as Taiwanese） language program of Les Cours d’Adultes de Paris, one of the largest public language learning institutions in France, graduated its first class in an online event on June 25.

The program, which was launched in October last year, enrolled 66 students from around the world, offering classes taught remotely by Taiwanese professors, a representative of the center told the Central News Agency.

Graduates demonstrated their proficiency in the virtual ceremony by giving presentations on a topic about Taiwan, simulating social interactions or singing songs.

Eleonore, a graduate of the course who fell in love with Taiwan in high school and has visited as an exchange student, said she was happy to “learn Hoklo idioms through Taiwanese bands, such as EggPlantEgg （茄子蛋）.”

“As someone who wants to live and work in Taiwan, I signed up as soon as I learned that the Paris municipal government was opening classes,” she said, adding that the program has helped her understand Taiwanese culture, Hoklo syntax and its differences from Mandarin.

Eleonore studied Taiwan and geopolitics at the Institute of Political Studies of Lyon and the University of London’s School of Oriental and African Studies, she said.

Coline Mailleux, a lecturer at the Center for Language Education and Research of Sophia University in Tokyo, sang the Taiwanese classic Express Love Letter （愛情限時批） by Wu Bai （伍佰） and China Blue （萬芳） with her classmates.

“I imagine being at a karaoke [club] in Taiwan every time I hear this song,” she said, adding that she visited the nation 15 years ago and has wanted to live there ever since.

“Taiwan is a country full of promises for the future,” she said.

Telecommunications integration engineer Benjamin, who made a presentation on Taiwanese beer, Kaoliang liquor and whiskey, said that he is learning the language because his wife is Taiwanese.

“Hoklo is an important part of the world’s cultural heritage and is worth protecting,” he said.

Pan Yi-ling （潘怡伶）, the program’s instructor for students without prior proficiency in Mandarin, said that learning about Taiwanese culture is an important part of the class, as some students have never been there.

Instructing students without a Chinese-language background presents additional challenges for teaching the meaning and context of phrases, which must be explained in French, making exact translations of idioms difficult, he said.

“I am amazed that so many French people with no relationship to Taiwan would want to learn Hoklo,” she said.

“The effort they poured into learning the language is deeply inspiring,” she added.

Miao Lin-Zucker （林季苗）, an associate professor in the foreign language department at the University of Lyon and one of the program’s founders, said that new classes would be opened in August next year.