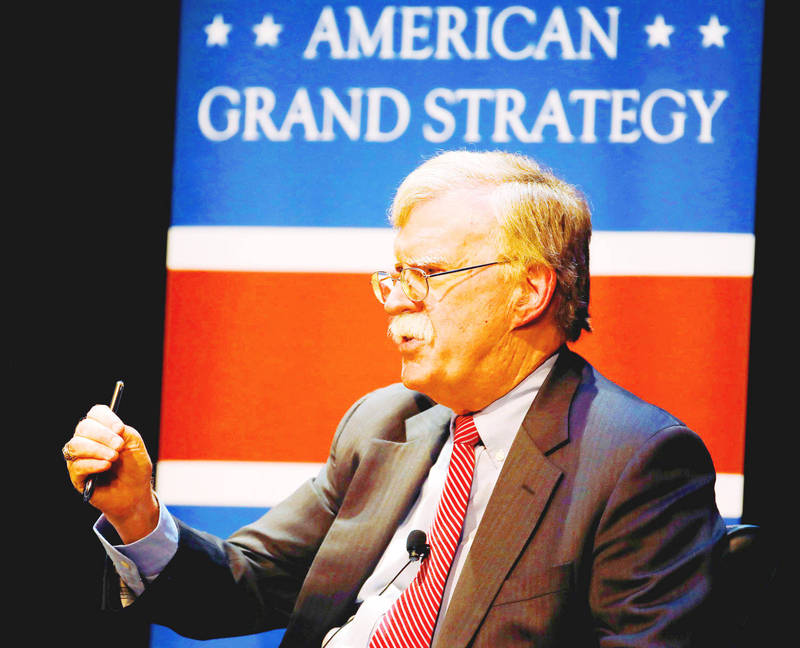 Taiwan should be included in talks about security in the Indo-Pacific region, former US national security adviser John Bolton said on Thursday, adding that the US’ policy of “strategic ambiguity” is long outdated.

Bolton made the remarks in a videoconference with the Foreign Press Association, in which he discussed with association president Ian Williams how the US should respond to the security threats faced by Taiwan and Ukraine.

Bolton called Moscow’s invasion of Ukraine “very disturbing,” as NATO has not been able to drive the Russians out of the country, and the effects of economic sanctions imposed by Western countries are limited.

“I don’t think China really wants wars with Taiwan,” he said, adding that China might spark a crisis, such as by declaring a blockade that requires the US, Japan and Australia to come to Taiwan’s aid.

If these countries take no action against China in such an event, “Taiwan will be in deep trouble,” he said.

US President Joe Biden in May said that US forces would defend Taiwan in the event of a Chinese attack, but later clarified that the US’ policy of strategic ambiguity toward Taiwan “has not changed at all.”

Beijing expressed its discontent over the statement, saying that recent military drills it conducted near Taiwan were a warning against Taiwan-US collusion.

Bolton said that the US should fully recognize Taiwan, as it is an independent country “by any customary international law and definition,” and a “thriving democracy.”

If the view offends Beijing, “so be it,” he said, adding that the US would not be told which countries to recognize.

With the Quadrilateral Security Dialogue and the AUKUS security pact with Australia and the UK, the US should take the opportunity to integrate Taiwan into security discussions in the region, which could make the whole area more secure, he said.

“Taiwan will be more secure to the extent people appreciate that it’s a legitimate democratic country, and they don’t want to be a part of China anymore,” he said.

If a war between Taiwan and China were to occur, a bilateral Taiwan-US operation could benefit greatly if joined by Japan, which has “considerable willingness to do that,” he said.