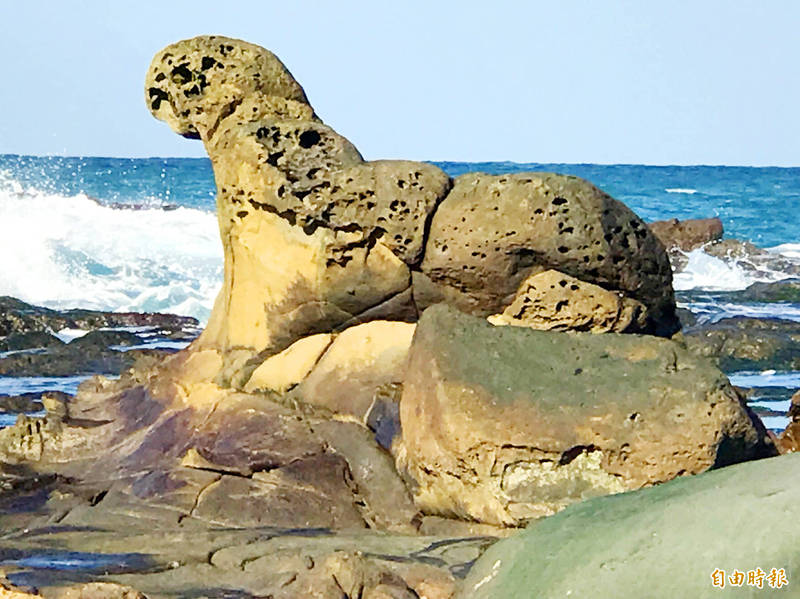 The respective applications were filed by the North Coast and Guanyinshan National Scenic Area Administration and the Wild Bird Society of Keelung, seeking to have the areas listed in the two categories defined in the Cultural Heritage Preservation Act （文化資產保存法）.

Weathering and coastal erosion have created a unique landscape at the coast of Heping Island and along the Badouzi coast, including pedestal rocks that resemble mushrooms or chessboards, as well as wave-cut platforms, the groups said.

The New Taipei City Government has designated Yehliu a natural landscape, as part of its efforts to promote international tourism, she said.

The rock on Badouzi’s Daping Shore （大坪海岸）, which resembles a resting seal and only appears at low tide, has become a popular local tourist attraction.

However, the Wild Bird Society said that the increase in visitor numbers has led to more garbage being disposed along the shore.

Some visitors sit on the rock while having their pictures taken, potentially damaging it, the group said.

Local residents have said they hope the rock becomes a designated natural monument and that the city government promotes awareness about the site.

Department of Economic Affairs Director Huang Chien-feng （黃健峰） said that the city government recently held a meeting in which the applicants explained their submissions and is planning to form an application review committee.

Keelung is seeking to gather opinions from all sectors involved in potential designations, Huang said.

In other news, the Keelung-based National Museum of Marine Science and Technology’s underwater cameras on Monday filmed a giant barrel sponge spawning in Chaojing Bay （潮境海灣）.

Museum official Chen Li-shu （陳麗淑） said that giant barrel sponges are the biggest such animals living in the waters near Taiwan, most of which have been spotted off northern Taiwan and Penghu County.

They usually spawn from late spring to the summer solstice and prefer water temperatures of 26°C to 27°C, she said, adding that the museum’s volunteer divers found 20 to 25 sponges spawning, or about 30 percent of all the sponges in the area.

Museum curator Chen Su-fen （陳素芬） asked the public to treat the precious, immobile animals with care so that more juvenile sponges can grow in the area.