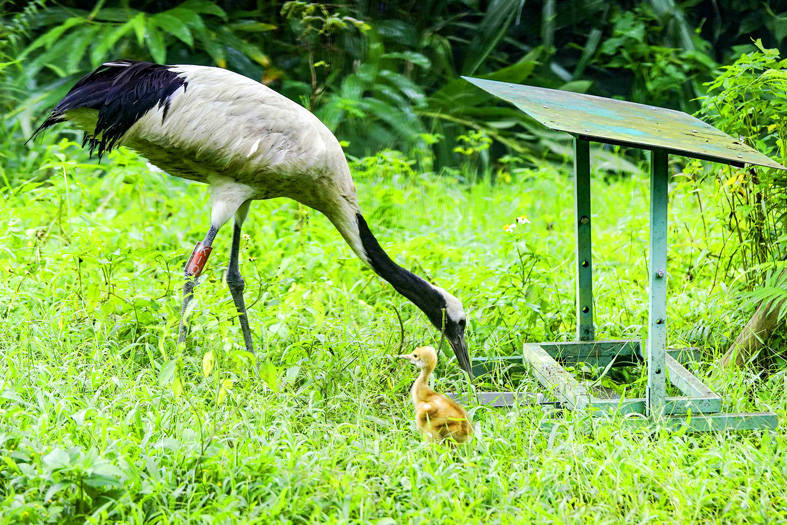 A chick is pictured with its mother, named Kika, a female red-crowned crane, in a photograph released by the Taipei Zoo yesterday. Photo courtesy of the Taipei Zoo via CNA

A pair of red-crowned cranes have hatched their first egg 11 years after arriving at the Taipei Zoo.

The cranes were in 2011 delivered from the Kushiro Zoo in Hokkaido, Japan, as part of a collaborative agreement to widen conservation efforts beyond the species’ country of origin, the Taipei Zoo said in a statement yesterday.

After getting used to their new habitat, Kika and Big were paired to begin breeding in 2014, with Kika, the female, often seen performing the species’ unique mating dance.

Big occasionally responded to Kika’s call, and she laid her first batch of eggs in 2015.

After that attempt was unsuccessful, the zoo altered their fodder, enlarged their habitat and artificially inseminated Kika’s eggs.

Her first chick hatched naturally and is being cared for by both parents.

The chick is expected to start following its mother around to seek food, while Big would protect them.

Even though the hatching of Kika and Big’s chick was eagerly awaited, it was not the first time that the species reproduced at the zoo, it said.

The first time a red-crowned crane chick hatched on its premises was in 1918, followed by several more hatchings, the zoo added.

The Japanese zoo joined in to celebrate yesterday’s hatching and is sharing its knowledge on caring for crane chicks with zookeepers in Taipei.