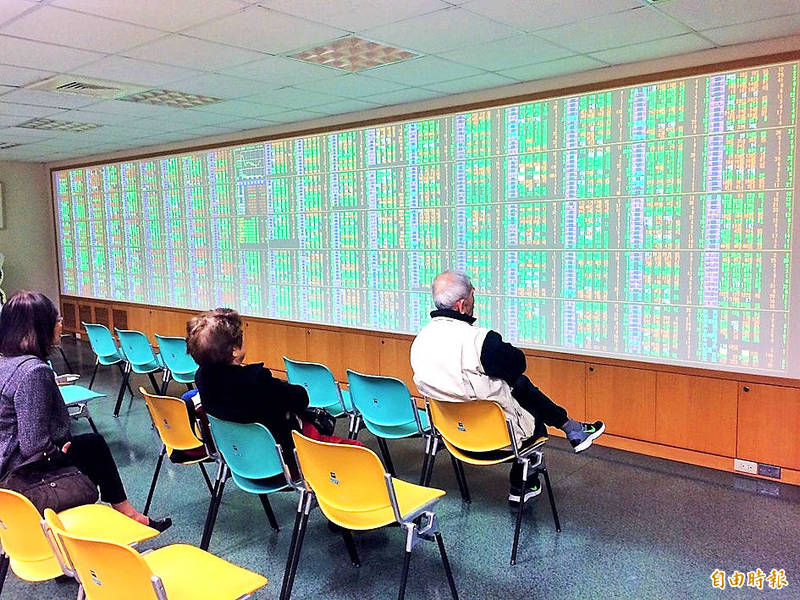 People look at an electronic stock board at a securities firm in Taipei yesterday. Photo: Kelson Wang, Taipei Times

UNDERPERFORMER: Foreign investors net sold about US$16 billion of Taiwanese stocks this quarter, the most among emerging Asian markets excluding China

The TAIEX yesterday slumped as it widened its decline from a January high to more than 19 percent and is just points away from a so-called bear market.

The index closed 2.7 percent lower yesterday, making it the worst performer in Asia. It was dragged by chipmakers after Bank of America took a cautious view on the industry’s growth prospects.

Taiwan Semiconductor Manufacturing Co （TSMC, 台積電）, which accounts for more than one-quarter of the index’s weighting, dropped 3.05 percent to close at NT$476 yesterday.

Facing headwinds of rate hikes by global central banks, tech-heavy stock markets in Taiwan and South Korea have been the worst performers in Asia this quarter, falling more than 15 percent.

Foreign investors net sold about US$16 billion of Taiwanese stocks during the three-month period, the most among emerging markets in Asia excluding China.

Deputy Minister of Finance Juan Ching-hwa （阮清華）, executive secretary of the National Financial Stabilization Fund, said the fund would continue to closely monitor the stock market to see whether it needs to step in.

The Taiwan Stock Exchange said in a statement that it would adopt stabilizing measures if there are “irrational” declines in the stock market.