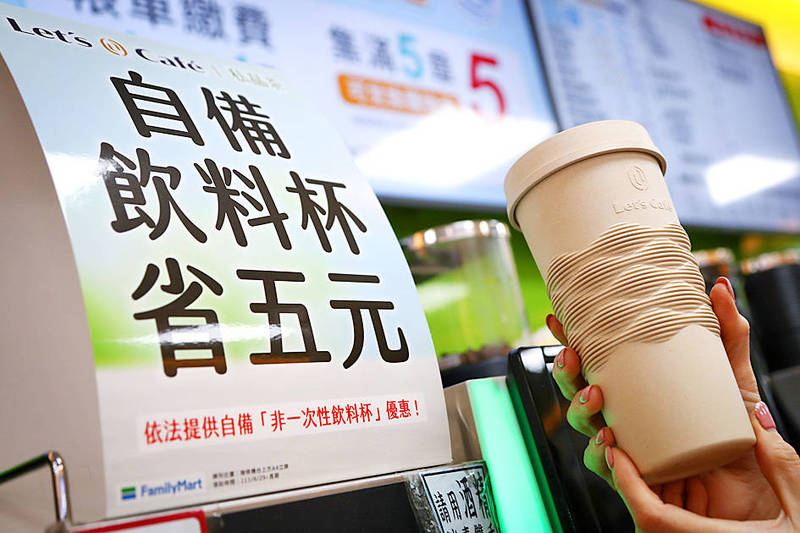 A woman visiting a FamilyMart convenience store yesterday holds a reusable cup in front of a sign announcing a discount of NT$5 for not using a single-use cup. Photo: CNA

Beverage businesses are tomorrow to begin giving people who bring their own cups a discount of NT$5 to NT$10, the Environmental Protection Administration （EPA） said yesterday.

The measure is part of the government’s plan to reduce the use of single-use cups, EPA Recycling Fund Management Board Executive Director Wang Yueh-bin （王嶽斌） told a news conference in Taipei.

“In 2020, Taiwan used 4 billion disposable beverage cups, generating a huge amount of waste,” Wang said, adding that the UN is to implement the legally binding Global Plastics Pact in 2024.

“All this shows the urgency of reducing the use of plastics,” Wang added.

The EPA in 2011 implemented the policy of giving people a discount of NT$1 to NT$3 if they brought their own cup, but it found that people would be more inclined to do so with a discount of NT$5, Wang said.

“Business owners have told us that only about 6 percent of people bring their own cup with a deduction from their beverage purchase of only NT$1 to NT$3,” he said.

“When a NT$5 discount takes effect, the number of people who bring their own cup will increase fivefold, which will help avoid the use of 580 million disposable cups per year, eliminating 7,000 tonnes of garbage,” Wang added.

More than 7,000 of Taiwan’s 7-Eleven stores have been implementing the policy since June 15, the convenience store chain said.

Starting on Friday, people who bring their own cup when purchasing coffee or tea on the first day of each month would be given a NT$7 discount, it said.

FamilyMart said that people would be given a NT$5 discount for bringing their own cup.

Before the end of next month, 100 of its stores would provide reusable cups, FamilyMart said, adding that it would expand the program to 400 outlets by the end of the year.

McDonald’s on June 1 started providing a NT$5 discount to people who bring their own cup, and it set up reusable cup rental stations in Tainan and Taipei, while KFC has made the NT$5 discount available since June 15.

Starbucks said it has for some time been giving people bringing their own cup a NT$10 discount, adding that it would continue doing so under the new policy.