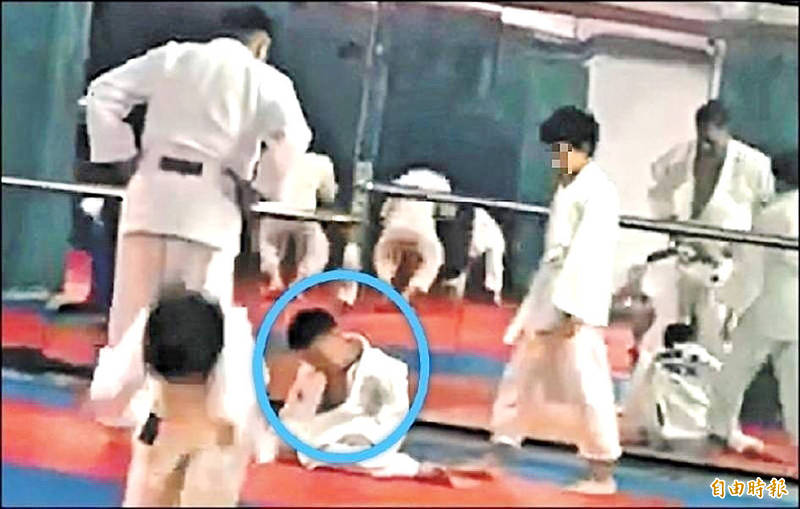 A judo coach surnamed Ho talks to a boy surnamed Huang, circled, at a judo class in Taichung on April 21. Photo: Taipei Times

The Taichung District Court yesterday sentenced to nine years in prison an unlicensed judo coach who caused the death of a seven-year-old student after slamming him onto the ground more than a dozen times.

In its decision against the coach, a man surnamed Ho （何）, the court cited his lack of remorse for using excessive force against an inadequately trained child and his failure to reconcile with the parents for his role in their son’s death.

Speaking on behalf of the boy’s mother, Taichung City Councilor Jacky Chen （陳清龍） said the family would appeal to a higher court.

Prosecutors said that Ho on April 21 instructed students in his class to throw the boy, surnamed Huang （黃）, 7, to the ground.

Ho did not believe the boy — who said he had a headache and did not want to practice — was unwell, but wanted to hurt him after Huang called him an “idiot,” the prosecutors said.

Ho slammed Huang to the ground more than 10 times, and Huang vomited, they said.

Ho knew that Huang was in his second week of classes and did not know how to fall safely in judo, but, after cleaning up the vomit, continued to slam Huang to the ground, stopping only when he became unconscious, they added.

As Huang was unresponsive, Ho called an ambulance, and medical personnel found Huang had bleeding on the brain, they said.

Huang was in a coma for nearly 70 days. On June 29, after his condition had deteriorated significantly, his parents had him removed from life support.

Prosecutors charged Ho with breaching Article 112 of the Protection of Children and Youth Welfare and Rights Act （兒童及少年福利與權益保障法）, as well as Article 277 of the Criminal Code.