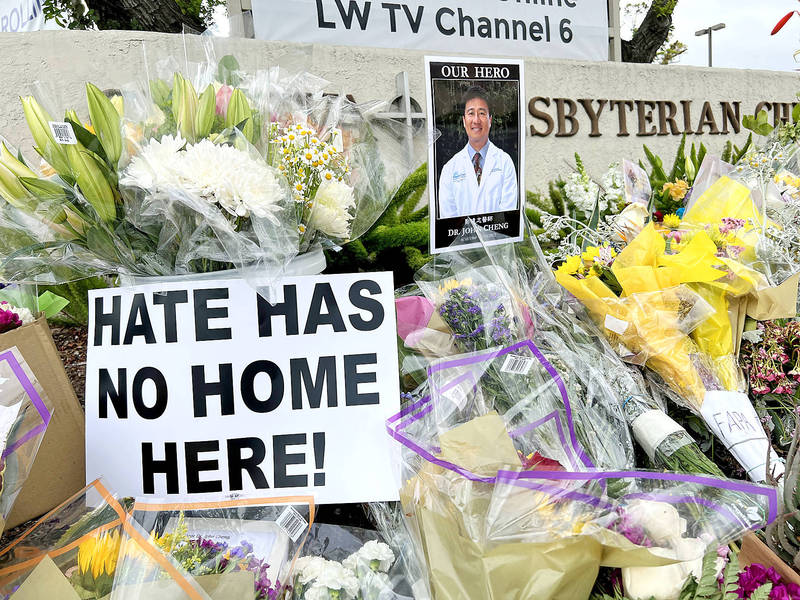 Flowers and messages honoring the victims in the May 15 shooting at Geneva Presbyterian Church are placed outside the church in Laguna Woods, California. Photo: CNA

‘PROTECTING OTHERS’: US Representative Michelle Steel said John Cheng’s bravery ‘saved dozens of other lives and prevented an even bigger tragedy’

Two US lawmakers have introduced a bill to award a medal to John Cheng （鄭達志）, a Taiwanese-American doctor who was killed last month in a confrontation with a shooter at a church in California.

US representatives Katie Porter and Michelle Steel, whose districts are in the Orange County area where the incident occurred, earlier this month introduced legislation to bestow the Congressional Gold Medal on Cheng.

They called Cheng “a hero who died protecting others.”

On May 15, Cheng, 52, and his mother met members of the Irvine Taiwanese Presbyterian Church at a gathering in Laguna Woods, California, when they were attacked by a man reportedly angered by Taiwan’s independence movement.

Witnesses said Cheng was shot after charging the shooter and trying to disarm him, which enabled other congregants to restrain the man and likely saved the lives of the other 40 people in the building.

Five other people were injured in the attack, while Taiwanese-American David Wenwei Chou （周文偉）, 68, has been charged with crimes, including premeditated murder.

In a June 22 statement, Porter praised Cheng as a “hero” who “undoubtedly saved lives when he charged the gunman attacking his mother’s church.”

Steel said that “with his bravery, [Cheng] saved dozens of other lives and prevented an even bigger tragedy from occurring.”

“I’m proud to support this effort to award him with a Congressional Gold Medal so that his courage will never be forgotten,” she said.

The Congressional Gold Medal is the US Congress’ highest expression of national appreciation for distinguished acts by individuals or institutions. Along with the Presidential Medal of Freedom, it is the US’ highest civilian award.

While the US House of Representatives does not have specific rules for awarding the Congressional Gold Medal, it typically requires two-thirds of its members to approve a resolution before a committee would review it.