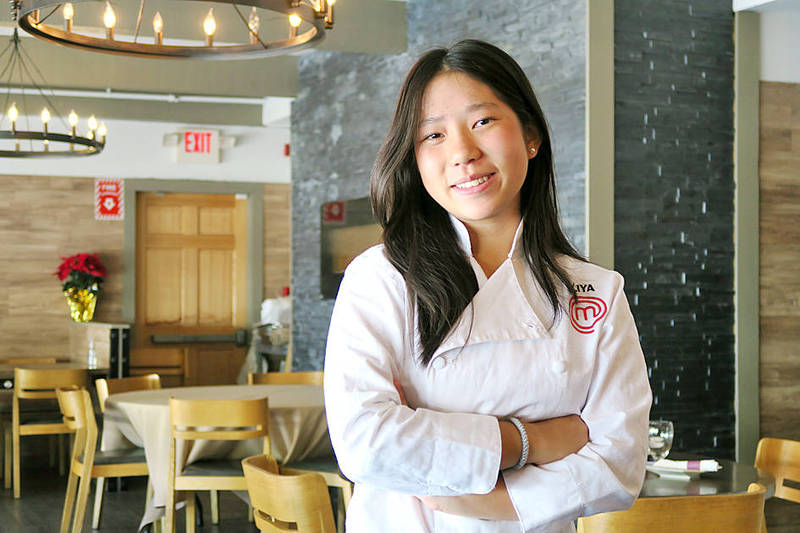 MasterChef Junior champion Liya Chu poses for a picture at her parents’ restaurant in New York on Saturday. Photo: CNA

Liya Chu （朱如茵）, whose parents are New York-based Taiwanese restaurateurs, has been crowned the champion of US television cooking competition MasterChef Junior, after wowing the judges, including celebrity chef Gordon Ramsay, with a feast of fusion cuisine.

In the finale of the show’s eighth season, broadcast on Thursday, Chu walked away with US$100,000 after serving a spread of spiced duck breast with scallion pancakes and miso eggplant, followed by coconut pandan panna cotta with a passion fruit coulis and sesame tuille.

Chu, who was 10 years old at the time of filming three years ago, faced off against then-11-year-old Grayson Price from Austin, Texas, after the duo topped the 14 other contestants.

“This would mean a lot to win in front of my family because cooking really just runs in my blood, so I just wanna keep that tradition going,” said Chu, who after winning continued to hone her culinary skills helping at her parents’ restaurants.

In addition to the cash prize, Chu also won a chance to dine with Ramsay at his restaurant in Las Vegas, as well as a line of top-end kitchen appliances.

“It’s so crazy to be the next MasterChef Junior. Starting from my mom’s kitchen getting here — now I can’t wait to open my own restaurant. This is the best day of my life,” she said.

Chu’s Taiwanese heritage was on show from the start, with the young prodigy serving a dish of soy and honey glazed eel with rice vermicelli and a ginger vinaigrette in the first episode, which prompted Ramsay to say: “You can definitely cook Taiwanese and it’s delicious.”

She continued in a similar vein throughout, whipping up family staples passed down from her mother, including dumplings and duck.

Although she participated in the junior version of the show, Chu’s win makes her the first Taiwanese-American to win a championship title in the US edition of MasterChef, putting her ahead of her adult counterparts Jason Wang （王凱傑）, Lynn Chyi, Felix Fang and Fred Chang （張程晅）.

Wang, who finished as joint runner-up on the adult version of the show, has parlayed his success into a television career.