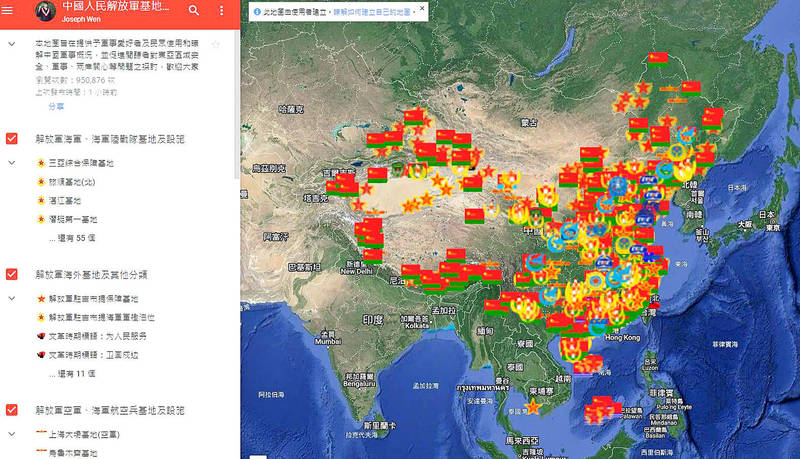 A university student has gained the spotlight for an interactive map he designed detailing all of China’s military bases and installations throughout the Indo-Pacific region.

Wen originally posted the map online on June 14 last year, but it gained greater attention after he mentioned it during an appearance on a China Television talk show.

On the show, Wen said he had gathered information on the locations from publicly available Web sites, as well as academic papers from military academies in Taiwan and other countries.

For example, Wen said he learned about one base’s location after a user on Baidu posted about a reservoir next to a military camp.

Wen said he used maps to cross-reference and pinpoint the base’s location.

“Sometimes I simply pore over maps with the naked eye, but this can lead to mistakes,” he said, adding that he once mistook a prison for a military facility.

“Intelligence agencies have more accurate information, so this is just for public use,” he said.

Wen on Saturday said that following his appearance on the TV talk show, he received threatening Twitter messages about his map.

However, Wen added that he was not frightened by the messages, but would report the Internet users to the police if necessary.

Despite his enthusiasm for military affairs, Wen said he has no family members in the military.

His interest in the military developed in junior-high school through conversations with friends, he said.

After creating the map, Wen learned that what he has been doing is known as open-source intelligence analysis.

Wen said he plans to continue updating the map, but has no plans for a career in the military or in intelligence.

“Music is a relatively pure interest that is not shrouded in conflict, with the exception of some aspects of music history,” he said, adding that he prefers the simple pleasures of studying music.