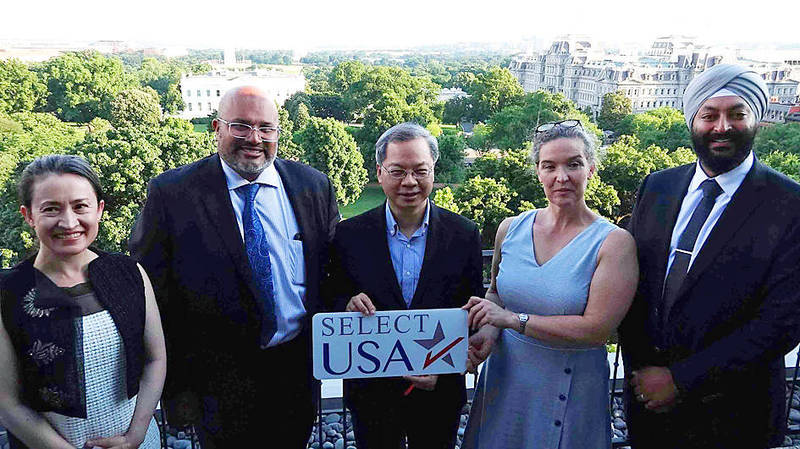 From left, representative to the US Hsiao Bi-khim, US Assistant Secretary of Commerce for Global Markets Arun Venkataraman, National Development Council Minister Kung Ming-hsin, American Institute in Taiwan Director Sandra Oudkirk and SelectUSA executive director Jasjit Singh pose for a photograph at a dinner party in Washington on Saturday for Taiwan’s delegation to the SelectUSA Investment Summit. Photo: CNA

MILD SYMPTOMS: Minister Without Portfolio John Deng tested positive for COVID-19 in Mexico, but could meet online this week with the Office of the US Trade Representative

Minister Without Portfolio John Deng （鄧振中） must skip the SelectUSA Investment Summit this week after testing positive for COVID-19, the Ministry of Foreign Affairs said yesterday.

National Development Council Minister Kung Ming-hsin （龔明鑫） is to instead represent the nation at the summit, the ministry said.

Deng developed a cough and other symptoms upon arrival in Mexico City on June 18 and tested positive for the virus. He went into self-isolation in a hotel in accordance with Mexico’s disease prevention and quarantine regulations, and adjusted his itinerary.

Deng was diagnosed by a doctor and prescribed COVID-19 medication, the ministry said, adding that the minister is in a stable condition.

Deng was visiting Mexico to facilitate trade cooperation and exchanges between the two nations.

Due to his illness, he could not travel to the US for meetings before the SelectUSA Investment Summit, an annual event sponsored by the US Department of Commerce aimed at attracting foreign investment.

The summit is being held in Maryland from yesterday to Wednesday.

However, as Deng has only mild symptoms, he might still attend a virtual meeting for the US-Taiwan Initiative on 21st-century Trade with the Office of the US Trade Representative later this week, the Executive Yuan’s Office of Trade Negotiations said.

Taiwan’s representative office in Washington on Saturday hosted a dinner for its summit delegation.

In addition to US Assistant Secretary of Commerce for Global Markets Arun Venkataraman, the dinner was attended by 265 people, making Taiwan’s delegation the largest foreign group at the summit for the fourth consecutive year.

Venkataraman said the US and Taiwan maintain close economic relations, and that bilateral trade and investment ties have been bolstered over the past few years.

Last year, Taiwan was the US’ eighth-largest trading partner, he said.