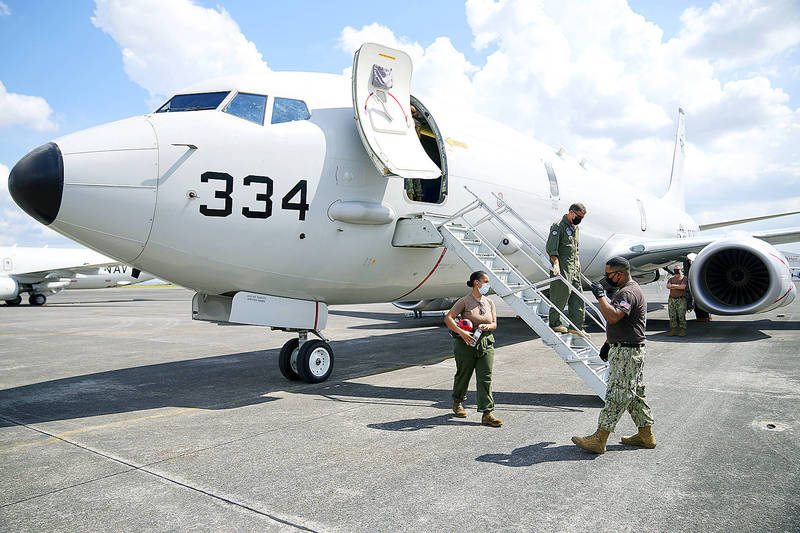 Admiral John C. Aquilino, Commander of the US Indo-Pacific Command, alights from a US P-8A Poseidon reconaissance plane at Clark Air Base in Pampanga Province, the Philippines, on March 20. Photo: AP

The passage of a US Navy P-8A Poseidon aircraft through the Taiwan Strait on Friday was aimed at countering China’s claims to the waterway and its “systematic expansion” in the region, local military experts said.

The flight of the maritime patrol reconnaissance plane was a response to China’s assertion that the Taiwan Strait is not international waters, Institute for National Defense and Security Research analyst Su Tzu-yun （蘇紫雲） said.

It was also aimed at countering the expansion of China’s military presence in the region, for example its aircraft incursions into Taiwan’s air defense identification zone （ADIZ） and warships sailing through waters claimed by China and other countries in the South China Sea, Su said.

The US Indo-Pacific Command said in a statement that the transit “demonstrates the United States’ commitment to a free and open Indo-Pacific,” CNN reported on Friday.

The US’ rare move was apparently meant to counteract the harassment of Japan by Chinese and Russian ships, Institute for National Defense and Security Research analyst Shu Hsiao-huang （舒孝煌） said.

The Ministry of National Defense said that it has a full grasp of China’s military activity and has contingency measures in place to safeguard national security.

People’s Liberation Army Eastern Theater Command spokesman Colonel Shi Yi （施毅） criticized the US for “endangering the peace and stability in the Taiwan Strait” by flying the aircraft and publicizing the move.

The Eastern Theater Command had organized air and ground forces to monitor the US aircraft’s entire operation, he said.

China has stepped up its military activities near Taiwan in the past few years in response to what it sees as closer ties between Washington and Taipei.

The Democratic Progressive Party has accused Beijing of continuing to use military, diplomatic and economic means to intimidate Taiwan and neighboring countries in the Indo-Pacific region, heightening regional tensions and making no efforts to break the deadlock between the two sides.