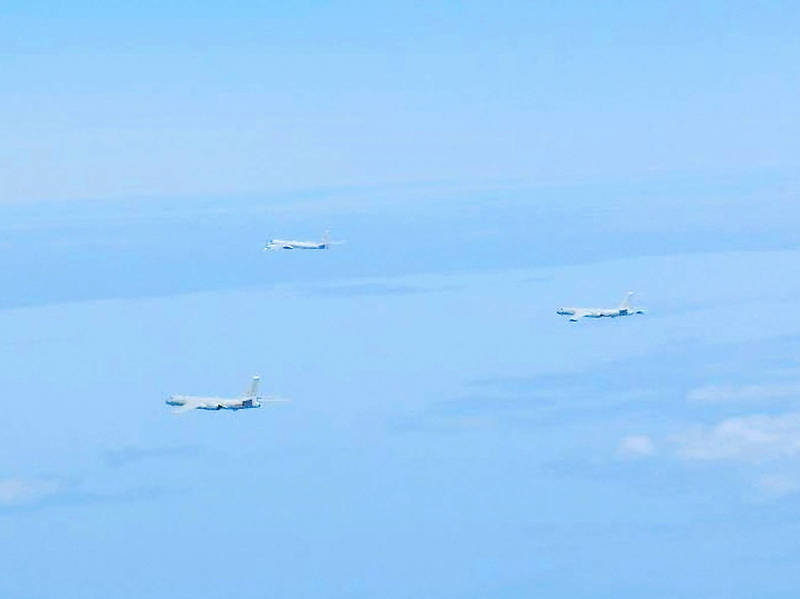 Russian and Chinese bombers fly above the East China Sea in a photograph taken by the Japan Air Self-Defence Force and released by the Japanese Ministry of Defense’s Joint Staff Office on May 24. Photo: Reuters

BEIJING AND MOSCOW: An analyst said that China and Russia are displaying their strategic partnership with joint exercises, while opposing Washington’s agenda

The government should formulate contingency plans and discuss whether it needs to share information on the location of Chinese military vessels and planes with Japan, while continuing to improve relations with Tokyo, Chang said.

Since 2019, China and Russia have been conducting joint exercises in which their military planes operate in airspace west of Japan, he said.

The Japanese Ministry of Defense’s Joint Staff Office this month has released several announcements saying that military activities by China and Russia are connected.

The two nations on May 24 flew seven military planes over the Miyako Strait, the Tsushima Strait and the Sea of Japan （known as the “East Sea” in South Korea and the “East Sea of Korea” in North Korea）, the office said.

On June 12, four Chinese Navy ships, including Type 055 destroyers, began long-distance exercises in and near the Sea of Japan, it said.

Russia wants to show it can still maintain a strong military presence in the Pacific amid its invasion of Ukraine, while China’s close military cooperation with Moscow is aimed at countering the “Indo-Pacific strategy” advocated by the US, he said.

If a war were to break out in East Asia, Chinese and Russian naval ships would be deployed in waters around Japan, he said.

Meanwhile, Institute for National Defense and Security Research analyst Shu Hsiao-huang （舒孝煌） said that the joint exercises are a display of the strategic partnership between China and Russia, and their opposition to the US, which advocates “freedom of navigation.”

Chinese vessels sailing near Taiwan proper is “somewhat provocative,” but they would be countered by Taiwan’s coastal missiles were the situation to escalate, Shu said.

The Japanese Ministry of Defense on Thursday said that six Chinese H-6 bombers accessed the Pacific, flying between the main island of Okinawa and the prefecture’s Miyako Island.

In Taipei, the Ministry of National Defense said on the same day that China sent 22 military planes into its southwestern air defense identification zone, two of which were Y-8 transport planes.