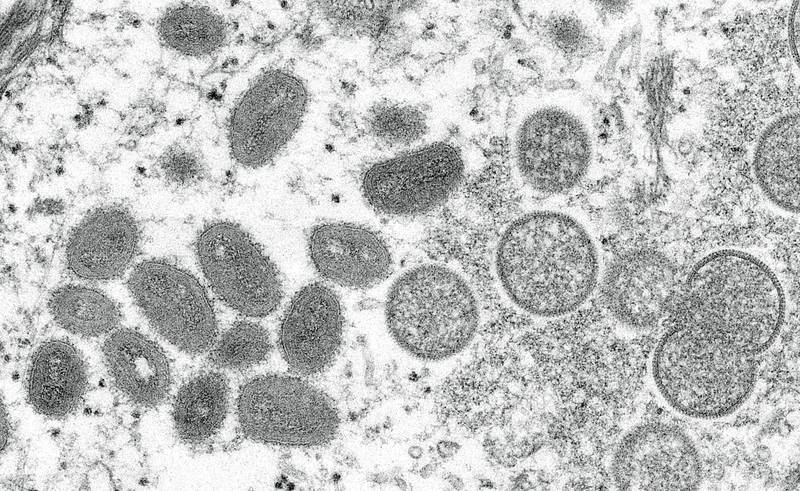 An electron microscopic （EM） image shows mature, oval-shaped monkeypox virus particles as well as crescents and spherical particles of immature virions, obtained from a clinical human skin sample associated with the 2003 prairie dog outbreak in this undated image obtained by Reuters on May 18, 2022. Photo: Reuters

Taiwan yesterday reported its first case of monkeypox, a man who recently returned from Germany.

On Monday, four days after his return, the man developed a fever, a sore throat, muscle pain, swollen lymph nodes and a rash, the Centers for Disease Control （CDC） said in a statement.

He sought medical attention two days later, and his case was reported to the CDC as a suspected monkeypox infection, the CDC said, adding that his test results returned earlier yesterday.

The man, who had been studying in Germany, is quarantining in hospital, the agency said.

The CDC is to notify the WHO of the nation’s first recorded case of monkeypox, he said.

The designation means that physicians are required to report confirmed or suspected cases to the CDC within 24 hours. Other category 2 communicable diseases are dengue fever, Zika fever, typhoid fever, measles and Chikungunya fever.

The CDC on Thursday said it had ruled out another suspected monkeypox case of a man in his 60s that was reported last week.

The disease is caused by the monkeypox virus, which can spread through close contact with an infected animal or person, and transmission occurs through direct contact with the infectious rash, scabs, body fluids or materials contaminated with the virus.

Since the UK first reported monkeypox cases in the middle of last month, at least 3,598 cases have been confirmed in 50 states around the world, mostly in Europe and the Americas, the CDC said.

Taiwan is the third Asian country that has reported the disease, following cases in Singapore and South Korea, the CDC said.