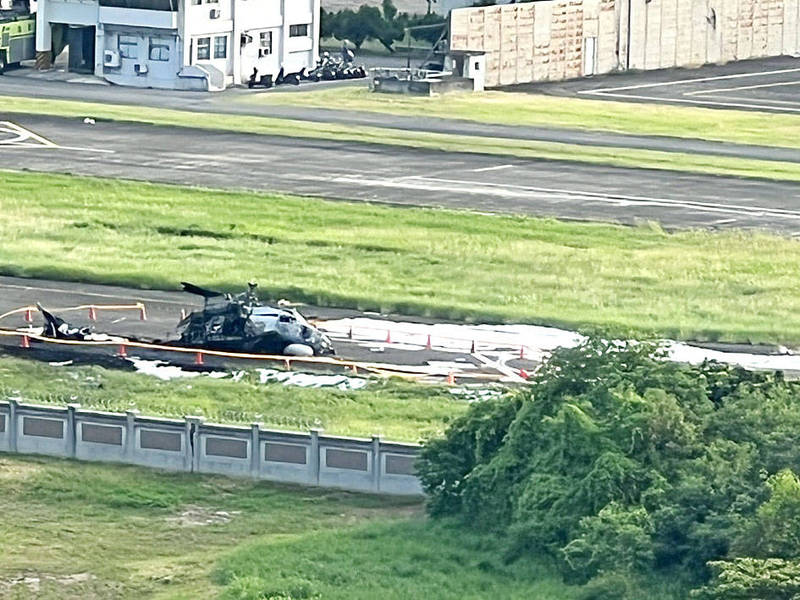 A crashed Sikorsky S-70C anti-submarine helicopter is pictured at the crash site on the Navy’s Zuoying Base in Kaohsiung yesterday. Photo: CNA

Four crew members were yesterday injured when a Sikorsky S-70C anti-submarine helicopter crashed at the Zuoying Naval Base （左營） in Kaohsiung, allegedly due to malfunctioning equipment.

The crew chief, a sergeant major surnamed Liu （劉）, was injured the most severely, with second and third-degree burns on 90 to 95 percent of their body, the Ministry of National Defense Navy Headquarters Command said yesterday.

The helicopter was conducting trial flight maneuvers when it landed heavily on the runway and burst into flames, the ministry said.

A statement released late yesterday evening said that the helicopter was greatly damaged, and the pilot, a captain surnamed Cheng （鄭）, and the copilot, a lieutenant colonel surnamed Chen （陳）, sustained lacerations and bone fractures.

The fourth crew member, a sergeant major surnamed Kuo （郭）, had second to third-degree burns on 10 percent of their body, but was conscious and in a stable condition, the ministry said.

The Medical Affairs Bureau said it has dispatched doctors from Taipei’s Tri-Service General Hospital to the hospital’s Zuoying branch to assist with treating the four.

Local police sealed off a local residence, as its garage door had been penetrated by debris from the helicopter crash, and are currently investigating the incident, the report said.

The Navy Command Headquarters has grounded all S-70Cs and ordered that they all undergo flight safety inspections.