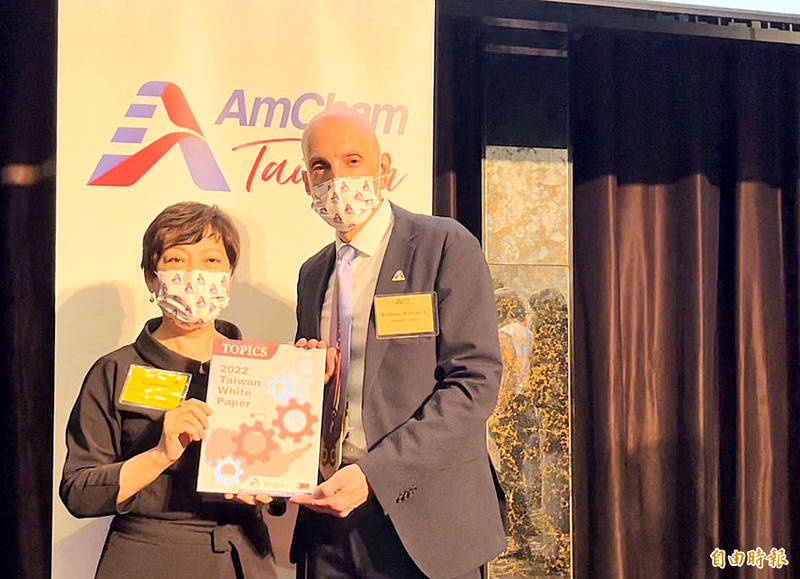 The American Chamber of Commerce in Taiwan （AmCham） yesterday called on the government to ensure stable electricity supply and speed up reopening the nation as border controls put investment opportunities at risk.

Taiwan should take advantage of the unprecedented and growing level of international attention, support and goodwill it has received over the past year by enhancing its business climate, and doubling efforts to sign trade and economic agreements, AmCham vice chairwoman Andrea Wu （吳王小珍） said upon the release of the chamber’s annual white paper.

The chamber said Taiwan should seek participation in multilateral trade talks in light of its importance in the global supply chains of technology products.

AmCham welcomes the recent announcement of a US-Taiwan initiative, but maintains its stance that securing a bilateral trade agreement is the single most important step to cement trade ties between the two sides.

Toward that end, Taiwan must make greater efforts to eliminate trade barriers and improve its regulatory system to become a more attractive partner for bilateral and multilateral trade agreements, Wu said.

Taiwan should also take quick and sustained action to ensure a stable energy supply, as the issue has become a more serious concern among member companies, she said.

The government should spend more money on upgrading the nation’s power grid and introduce greater incentives for investments in energy storage facilities, the chamber said.

Taiwan should also remove legal barriers that slow the development of renewable energy sources, it said.

The government’s goal of increasing the share of renewable energy in the nation’s energy mix could fall apart if it fails to expand capacity, which might need to grow 2.5 percent annually in the coming years, in line with the nation’s GDP growth, it said.

Taiwan should also lift border controls and allow business travel to return to normal, as long as such a move does not endanger public health, Wu said, adding that many countries have chosen to live with COVID-19.

Foreign and local companies have over the past two years complained about inconvenience when conducting business in Taiwan due to quarantine, mask and other disease prevention measures.

The government should also address a shortage of highly skilled workers, as the problem has adversely affected business operations in the country, Wu said.

While Taiwan benefits from a strong pool of well-educated, highly motivated and hard-working talent, it continues to suffer from shortages in certain key industries, such as the semiconductor and other technology-related sectors, Wu said, adding that vigorous efforts are urgently needed to attract foreign talent and boost the English skills of Taiwanese workers.

Asked whether AmCham’s members had raised concern over Taiwan’s security amid increasing military and political pressure from China, AmCham Taiwan president Andrew Wylegala did not respond to the question directly, saying only that members would have their own assessments and business decisions based on the global and regional situation.

“We [the AmCham] naturally are hoping for the continuity of peace and stability in this region around the Taiwan Strait, that is certainly conducive to our members’ interests,” Wylegala added.