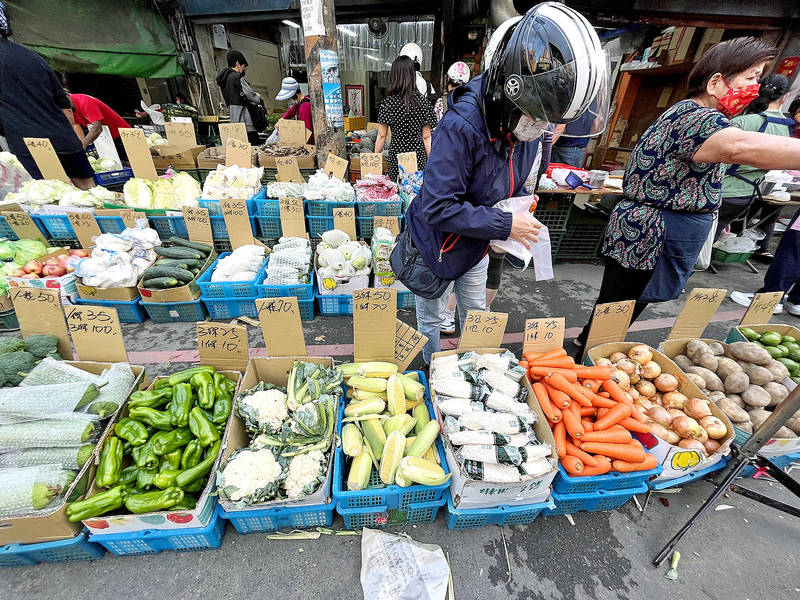 People shop for fruit at a market in Taipei’s Beitou District on April 14. Photo: CNA

Taiwanese consumers are feeling the pinch of inflation more sharply than other people in the region after food costs spiked 5.8 percent in the first five months of this year, faster than in neighboring countries, the Directorate-General of Budget, Accounting, and Statistics （DGBAS） said yesterday.

The increase in food costs, which account for 25 percent of the consumer price index （CPI）, is higher than South Korea’s 4.6 percent, Thailand’s 4.5 percent, Hong Kong’s 3.8 percent and Singapore’s 3.1 percent, the agency said, adding that food costs in the US rose 8.6 percent and climbed 6.1 percent in Europe.

It said the relatively moderate CPI readings in Taiwan had to do with government interventions.

That is why Taiwan’s non-food costs — especially electricity and fuel prices — are relatively tolerable, while they have surged 44.2 percent in the US, 30 percent in the EU, 30.4 percent in Thailand, 26.6 percent in South Korea, 24.9 percent in Singapore and 19.7 percent in Japan, the agency said.

It dismissed the claim that Taiwan’s food costs are overly high, citing World Bank data showing that Taiwan’s prices ranked 73th among 176 economies, behind the US, Japan, South Korea and Singapore, although ahead of Thailand.