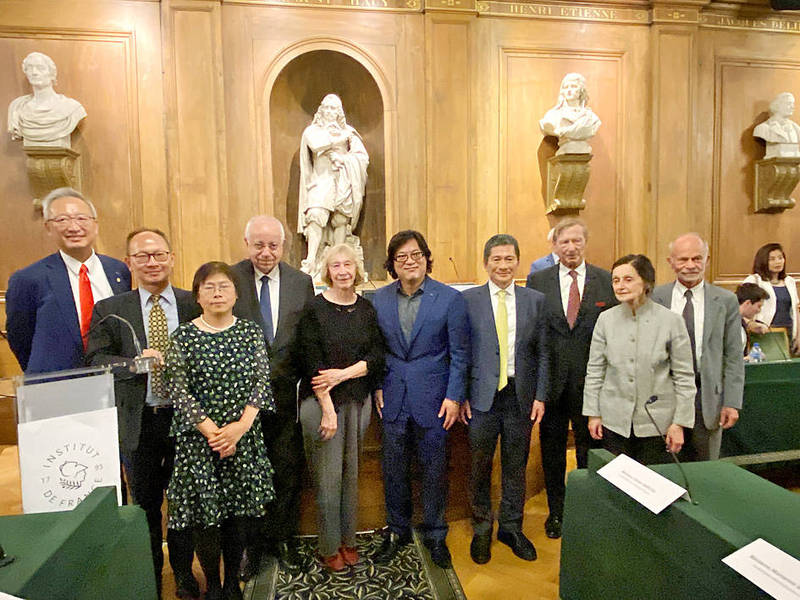 A Slovenian Sinologist and a Taiwanese publisher were presented with the Taiwan-France Cultural Award in Paris on Monday for their contributions to cultural exchanges between Taiwan and Europe.

Jana Rosker, a professor in the Department of Asian Studies at the University of Ljubljana, and Wu Kun-yung （吳坤墉）, the general planner of the book series Collection Critique Socio-politique published by Editions Utopie, received the award from Minister of Culture Lee Yung-te （李永得）, who was on a visit to Europe.

During the award ceremony at the Institut de France, Lee praised Rosker and Wu for facilitating bilateral exchanges in their fields of expertise.

Now in its 25th edition, the award was set up by the Ministry of Culture, and the Institut de France’s Academy of Moral and Political Sciences in 1996.

Rosker, who has visited Taiwan for research multiple times since 1994, introduced Taiwanese philosophy and its role in the greater Asian philosophy to Europe, Lee said.

The academic also facilitated exchanges between universities from both sides and introduced Taiwanese philosophers to academic fields in Europe, he said.

Rosker in a pre-recorded video said in Mandarin that she felt connected to Taiwan, which she said was like her second home.

She praised Taiwan for integrating Western philosophy and Buddhism, Confucianism and Taoism into a “new Confucianism,” which she described as a “unique” philosophy that serves as a “lifebuoy” in the protection of Chinese culture and philosophy.

Taiwan’s philosophy is “open-minded and [makes] people feel hopeful about the future,” because it “features human dignity, empathy and unity, which is what the modern world needs the most,” Rosker said.

Wu, who is also cofounder of Association Taiwanaise des Traducteurs de Francais, an association for French translators in Taiwan, has introduced social issues in Taiwan and France to both sides, Lee said.

The publisher, who was awarded the Order of Arts and Letters in France in 2018 for his contributions to arts and literature, told the Central News Agency in an interview that both countries “have the same criticisms and resistance to control, as well as desire for freedom.”

Such a spirit represents humanity and is universal, rather than existing only between the two sides, Wu said.

Lee arrived in Germany on Monday last week to begin his eight-day tour of Europe, before traveling to the Czech Republic and France.

He told the CNA that the award has become more influential in promoting mutual understanding between Taiwan and Europe.

On Monday, Lee met with Alain Richard, head of the French Senate’s Taiwan Friendship Group. They touched on issues related to cultural exchanges between Taiwan and France, and higher education and academic research.