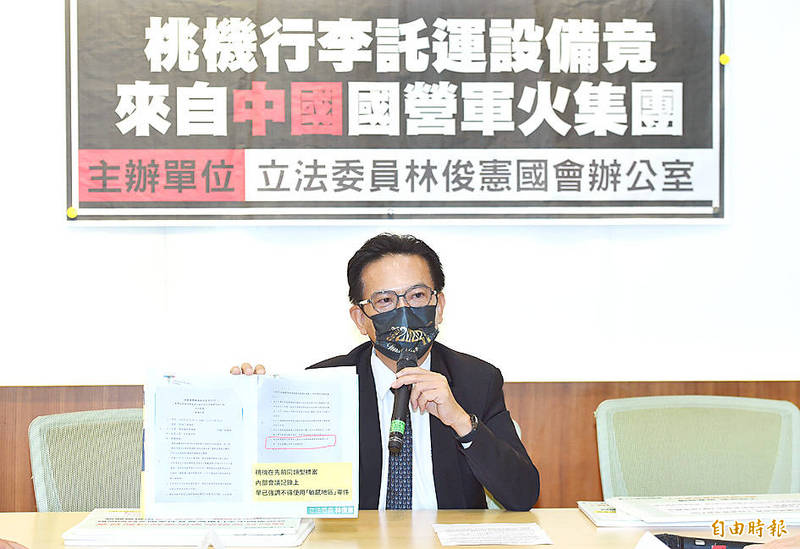 LOOPHOLE: The parts and software for a luggage self-check-in system came from a Chinese firm, which could give it backdoor access to the airport, a lawmaker said

The luggage self-check-in system in Taiwan Taoyuan International Airport’s Terminal 1 contains parts and software made by a subsidiary of a Chinese arms manufacturer, which could put the nation at risk, Democratic Progressive Party Legislator Lin Chun-hsien （林俊憲） said yesterday.

The conveyor belts were manufactured and assembled in China, then disassembled and shipped to Taiwan, he said, adding that the system’s software also came from Norinco.

Lin accused the airport of failing to adequately supervise the procurement process for the equipment when it upgraded the check-in systems in January.

The airport said that the tender for the upgrade project was won by Taiwanese company CTCI Advanced Systems Inc （新鼎系統公司）, which had said that its system used parts from China, but it was built in Taiwan.

Lin said the most concerning issue is that although the hardware for the system’s programmable logic controller came from a Japanese company, the controller was using a programming language designed by Norinco, which could give the company backdoor access to the airport’s systems and pose a security risk.

The issue came to light due to a regulation that stipulates that such equipment must be assembled and tested in the manufacturer’s factory before it can be installed in the airport, Lin said.

As the factory is in China, CTCI sent inspectors from CECI Engineering Consultants — the company commissioned to inspect the work — to China to fulfill the requirement.

CTCI claimed the system was built in Taiwan, as it had to be disassembled for shipment, Lin said, adding that this was a loophole in the supervisory process.

“The airport has clearly stated in the past that contractors cannot use Chinese components, so how did this project slip through?” he asked. “There must be an investigation by airport authorities and the Ministry of Transportation and Communications to ensure such projects do not compromise national security.”

Taoyuan International Airport Corp senior vice president Fan Hsiao-lun （范孝倫） said that CTCI had listed the Norinco subsidiary as one of its parts suppliers during the bidding process, but that the airport believed it to be a supplier of only small components and therefore not a cause for concern.

The airport would handle the situation according to regulations and would prioritize domestically produced components, he said.