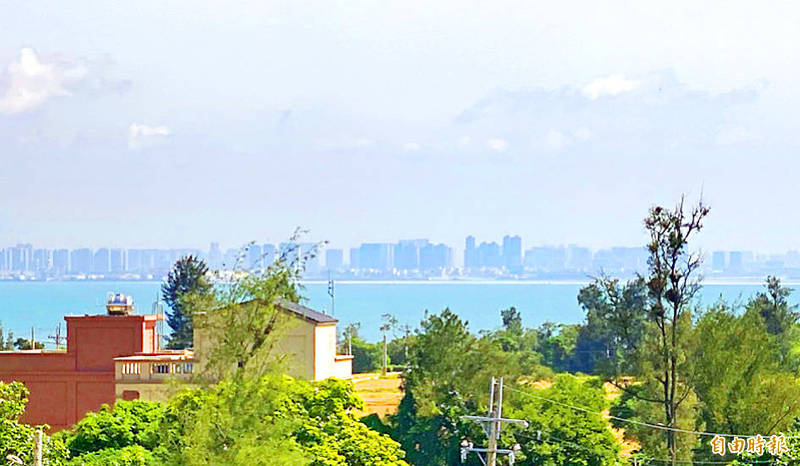 A view of China’s Xiamen taken from Kinmen County’s Lieyu Township is pictured in an undated photograph. Photo: Taipei Times

Ko, who is also the Taiwan People’s Party （TPP） chairman, made the proposal when presiding over the opening ceremony of the party’s office in Kinmen on Saturday.

He said the bridge could solve Kinmen’s population, electricity and garbage problems, as well as serve as a shortcut for leaving or entering Taiwan without traveling via Taipei International Airport （Songshan airport）.

He also proposed building a hospital in Kinmen to attract people who are seeking medical treatment in Taiwan.

“Try it first and deal with the problems if they occur,” he said in response to national security concerns.

Kinmen would be completely subject to China if a bridge were built, as the People’s Liberation Army （PLA） could occupy Kinmen and put Taiwan in danger of being annexed, they said.

Democratic Progressive Party （DPP） Legislator Wang Mei-hui （王美惠） denounced the proposal as “giving Kinmen away to China,” while DPP Legislator Lin Chun-hsien （林俊憲） asked: “Why does Ko want to risk everything by building a bridge to open up for an invasion by the PLA ?”

Cross-Strait Policy Association secretary-general Wang Chih-sheng （王智盛） said that Ko’s proposal was either ignorant or oblivious to national security issues, which showed that the TPP lacks a central idea regarding Taiwan’s value.

“If a war breaks out, the PLA could quickly advance into Kinmen, which is the first target, before China’s full military assault against Taiwan... Ko is offering the ‘Trojan Horse’ scheme for China to take over Kinmen,” Taiwan Statebuilding Party spokesman Chang Po-yang （張博洋） said.

Ko yesterday said the proposed bridge could benefit economic cooperation between Kinmen and Taiwan proper, as it would eliminate the need for Taiwan Power Co （台電） to allocate an annual subsidy of NT$2 billion （US$67.25 million） to transport fuel to Kinmen for power generation, adding that buying electricity from Xiamen could save NT$15 per kilowatt-hour.

The bridge could further facilitate the “small three links,” which President Tsai Ing-wen （蔡英文） touted when she headed the Mainland Affairs Council, he said.

The comment that a bridge would allow the PLA to easily launch an attack shows “a lack of backbone,” Ko said.

“Why haven’t they thought of it the other way around — that it would be easier for Taiwan’s military to reconquer mainland China?” he said.