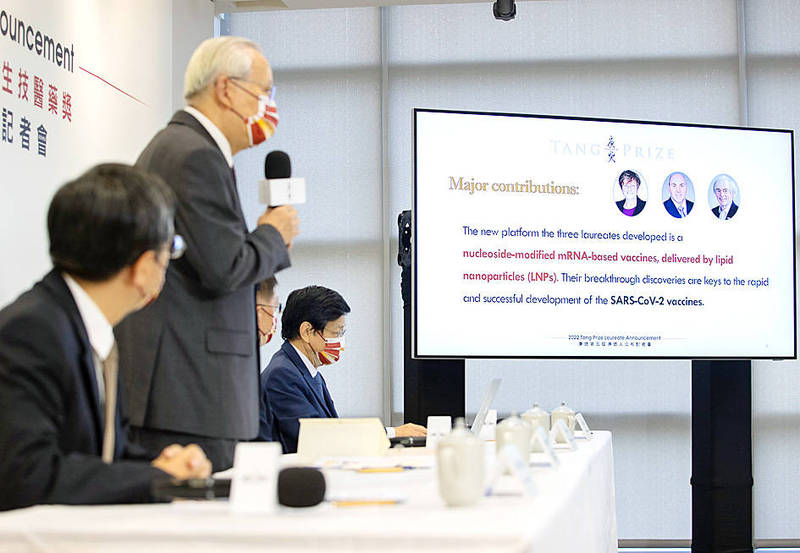 Three scientists whose research laid the foundation for messenger RNA （mRNA） COVID-19 vaccines were named the winners of the 2022 Tang Prize in Biopharmaceutical Science at a ceremony in Taipei yesterday.

Katalin Kariko, Drew Weissman and Pieter Cullis were recognized “for the discovery of key vaccinology concepts and approaches, leading to the successful development of mRNA-based COVID-19 vaccines,” the Tang Prize Foundation said.

The technologies developed by the three laureates “not only revolutionized vaccinology, but also signaled a paradigm shift in protein therapy. They represent the advent of a new era of RNA-based therapies,” the foundation said.

Kariko and Weissman, who have worked together for more than two decades, created a modified version of mRNA that would not cause an inflammatory response when injected into the body. The technology is used in the Pfizer-BioNTech and Moderna COVID-19 vaccines.

Cullis is a pioneer in delivery systems for mRNA to human cells, based on lipid nanoparticles, which are bubbles of fat that wrap around and protect mRNA.

In a recorded video, Kariko said she was honored and humbled to learn that she had received the award along with Weissman and Cullis.

Weissman said a shared interest in science, a hunger for learning and perseverance formed the foundation of his partnership with Kariko.

Cullis credited his collaborators and colleagues for the award.

“The award is really being given for the work of literally hundreds of people that I’ve had the pleasure to work with over the last 40 years, so it’s really fantastic,” he said.

The three also credited curiosity, collaboration and finding joy in their work as critical to their efforts in the research.

Kariko is an adjunct professor at the University of Pennsylvania and a senior vice president at BioNTech. She was born in Hungary and moved to the US after obtaining a doctorate in biochemistry.

Weissman, a US researcher, is the director of vaccine research at the University of Pennsylvania Perelman School of Medicine.

Cullis is a professor of biochemistry and molecular biology at the University of British Columbia. The Canadian researcher has cofounded several companies, including Integrated Nano Therapeutics, Molecular You and Acuitus Therapeutics.

The Tang Prize is a biennial award established in 2012 by Taiwanese entrepreneur Samuel Yin （尹衍樑）, chairman of the Ruentex Group, to honor people who have made prominent contributions in four categories: sustainable development, biopharmaceutical science, Sinology and rule of law.

The winners in each category share a cash award of NT$40 million （US$1.35 million） and NT$10 million in research funding.