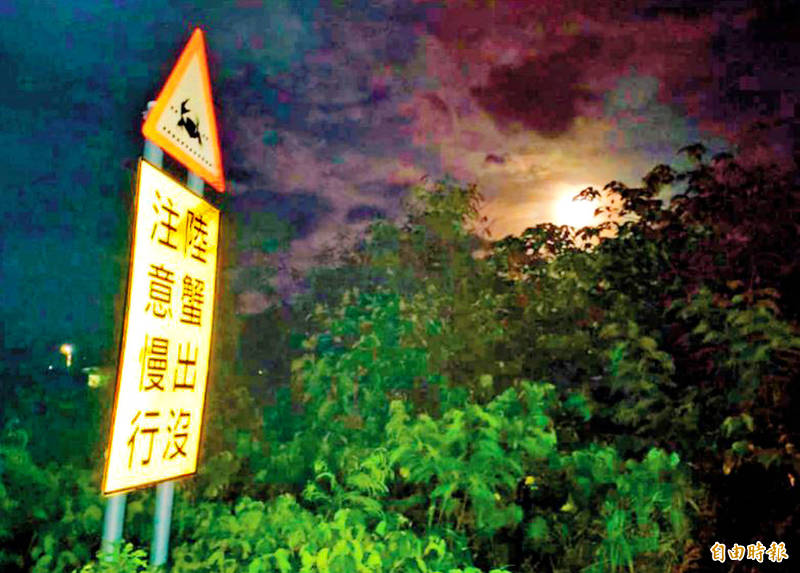 A sign alerting motorists to slow down and watch out for land crabs is pictured along a road in Pingtung County’s Checheng Township in an undated photograph. Photo: Tsai Tsung-hsien, Taipei Times

Pingtung County Environmental Protection Union supervisory board member Chu Yu-hsi （朱玉璽） said that numerous crabs dwelling in a nearby wetland are killed by vehicles on a 250m section of the road each year.

The section — which runs north-south along the wetland from Sihchong （四重） creek to Baoli （保力） creek — acts as a barrier to the crabs, which reproduce on land, he said.

Citing roadkill figures gathered by volunteers, Chu said that vehicles run over about 10 female crabs every day during the height of the crustaceans’ breeding season, he said, adding that the death of a female crab could mean the loss of 200,000 eggs.

The most affected species are Cardisoma carnifex, which account for about 80 percent of the wetland’s crab population, along with Tuerkayana hirtipes and hermit crabs, he said.

The county could implement the park’s policies to protect the township’s crabs, he said.

A volunteer surnamed Yang （楊） said the scenic road has less traffic than Provincial Highway 26, which means similar policies could be readily adopted.

The Pingtung Department of Agriculture said it would consider implementing the controls along the road, depending on traffic patterns.