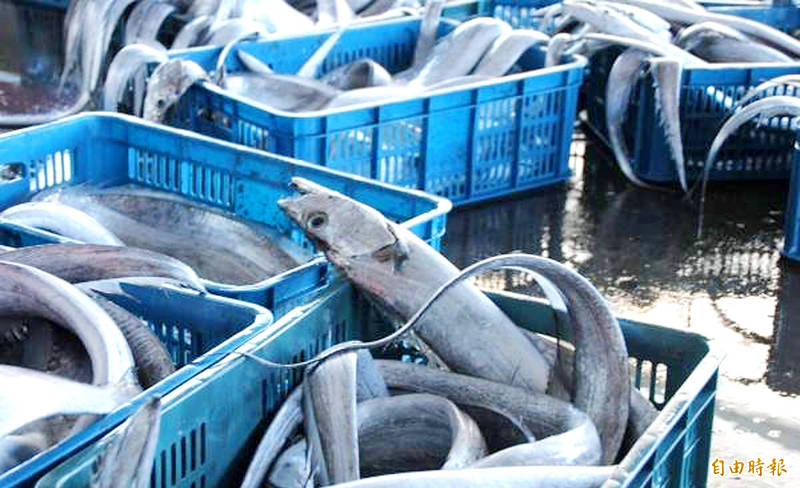 SCARE TACTICS: China should provide scientific evidence to back its claims that SARS-CoV-2 was found on packaging of Taiwanese products, an official said

The Council of Agriculture yesterday said that food packaging does not pose a significant COVID-19 risk after Bejing imposed a temporary ban on a Taiwanese frozen seafood company, claiming it found SARS-CoV-2 on packages of frozen fish.

The ban was promulgated on Friday last week after SARS-CoV-2 was detected on the packaging of several items, Ma said.

More stringent genetic testing protocols are to be implemented for seafood exports from Taiwan, he said.

The Chinese General Administration of Customs wrote in a notification last week that it has suspended the permit of a Taiwanese firm following the discovery of traces of the virus on the packing material of chilled and frozen hairtail fish.

Council spokeswoman Chen Shu-jung （陳淑蓉） said that Bejing has been preying on fear of COVID-19 — especially of residues of the virus on packaging — as an excuse to cut off imports.

“China should provide complete scientific documentation to justify its actions, and Taiwan will make this demand through exchange platforms shared by the two countries,” Chen said.

Taiwan requires agricultural products and their packaging to be tested for the virus before clearing them for export, Food and Drug Administration Director-General Wu Shou-mei （吳秀梅） said.

“This system was implemented soon after the [COVID-19] outbreak and it has not detected any traces of the virus in products or on packaging,” Wu said.

Hwang Kao-pin （黃高彬）, director of the division of pediatric infectious diseases at China Medical University in Taichung, said that no confirmed cases of COVID-19 transmission through packing material have been reported.

Taiwanese frozen or chilled seafood is usually shipped to China as soon as it is packaged, which means viral residues on packaging would have come from a packaging operator who was working unmasked while infected, Hwang said.

“This scenario is highly unlikely. Even if it did happen, the amount of the virus on the parcel would be negligible,” he said. “People do not have to be worried because we do not eat packaging.”

The virus that causes COVID-19 is destroyed by temperatures higher than 80°C, which means it would be eliminated by food preparation methods normally utilized for hairtail dishes, he said.

The owner of Peitu Frozen Foods could not be reached for comment.

Employees at the company’s packing plant said that fish arrive at the site pre-packaged and workers merely add ice to prepare the product for shipping.

Chinese officials should not have blamed the company before conducting an investigation, one employee said, adding that the virus could have gotten on parcels at any point in the packaging and transportation process, including some that take place in China.

A person familiar with Keelung’s fishing industry said on condition of anonymity that Peitu Frozen Foods’ owner recently complained about business losses at the factory and that the company had gone without Chinese clients for a long time.

Chinese allegations that viral genetic material had been found on the packing of the firm’s products is hard to reconcile with information provided by the company’s owner, the source said.