《TAIPEI TIMES》 US and China clash over Taiwan at defense summit 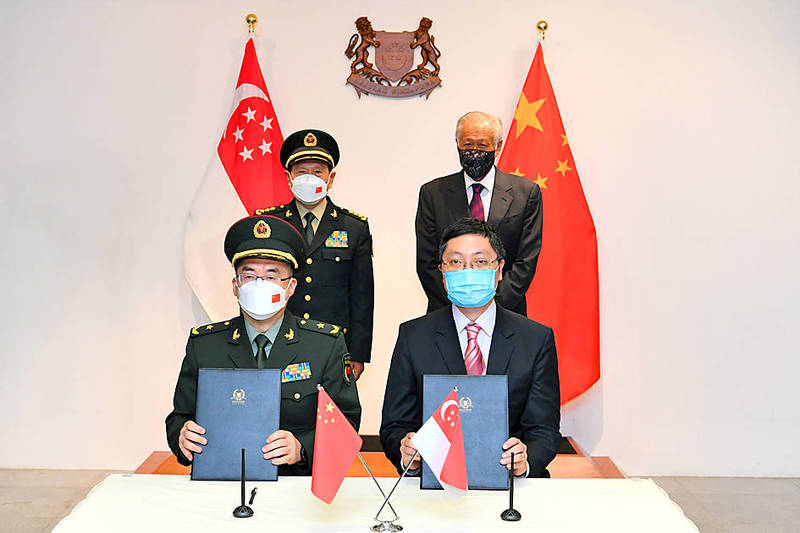 ‘NO HESITATION’: Beijing must refrain from its ‘destabilizing actions,’ the US defense secretary said as China threatened war in the Taiwan Strait

Beijing would “not hesitate to start a war” if Taiwan declares independence, China’s defense minister warned his US counterpart in their first face-to-face talks, the Chinese Ministry of National Defense said yesterday.

“If anyone dares to split Taiwan from China, the Chinese army will definitely not hesitate to start a war no matter the cost,” it cited Chinese Minister of National Defense General Wei Fenghe （魏鳳和） as telling US Secretary of Defense Lloyd Austin on the sidelines of a summit in Singapore.

The US and China are expected to use the Shangri-La Dialogue, a major Asian security forum, to press their competing visions for regional stability, even as the war in Ukraine consumes Washington’s attention and Beijing struggles with economic pressures at home.

Austin and Wei are expected to deliver speeches at the event, which started late yesterday.

The US is seeking to use the three-day conference to push back against growing Chinese influence in the Asia-Pacific region, while also establishing guardrails to prevent competition from getting out of hand.

Austin and Wei last spoke during a telephone call in April.

Japanese Prime Minister Fumio Kishida, a key US ally, was to give the opening event’s keynote speech.

He was expected to set out his views on expanding the US concept of a free and open Asia-Pacific region with an eye to the war on Ukraine and China’s military assertiveness.

Many nations attending have resisted pressure to take sides and have sought to avoid getting caught in the middle.

Singapore-based International Institute of Strategic Studies executive director James Crabtree said that while the focus is on the US and Chinese defense heads, as they are expected to meet on the sidelines of the conference, it remains unlikely that there would be any kind of breakthrough on new areas of cooperation between the two sides.

“You look during the Ukraine crisis — that has reinforced in the eyes of both the Americans and the Chinese that they’re not really acting in a way that is honest and forthright with each other,” he said in an interview with Bloomberg TV. “So part of the problem is it’s hard to see how you get better results out of that relationship.”

A flurry of bilateral talks between defense ministers have started ahead of the conference.

Austin and Singaporean Minister for Defence Ng Eng Hen （黃永宏） had one of the first bilateral discussions.

More than 30 defense ministers are in Singapore for the event.

Kishida, who had persuaded some traditional Southeast Asian partners of Russia to criticize its war in Ukraine, is expected to use his speech to bring others in Asia aboard.

Kishida has taken a tough stance on Russia’s attack on Ukraine and made frequent veiled warnings about the risk of a similar grab for territory by China.

A senior US defense official, who briefed reporters ahead of Austin’s arrival, said that the region has seen a clear trend toward self-isolating behavior by China.

Countries across the region are concerned by Beijing’s aggressive behavior, the official said, adding that the example of Ukraine looms large in the region, demonstrating the risks of disorder and spheres of influence.

The Pentagon is working to ensure that the meeting with Wei would be professional and substantive, the official said.

The US has no desire to create a public spectacle, the official said, referring to testy public exchanges between the US and China in the past few years.

The official said the US places a priority on improving crisis communications with Beijing.