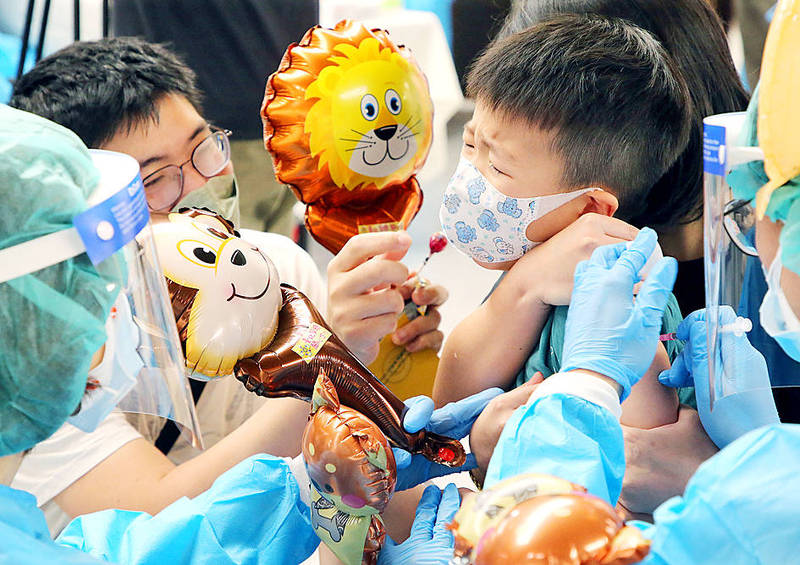 A father tries to cheer up his child as a nurse administers a COVID-19 vaccine at a vaccination station at Taipei’s Liberty Square on Sunday. Photo: CNA

By Wu Liang-yi and Kayleigh Madjar / Staff reporter, with staff writer and CNA

Children would only need to wait four weeks between COVID-19 vaccinations instead of 12, the Central Epidemic Command Center （CECC） said yesterday, pending a decision on when the policy is to begin.

The Ministry of Health and Welfare’s Advisory Committee on Immunization Practices （ACIP） held a meeting in the afternoon to discuss the issue, as concern mounts about the risk of severe COVID-19 complications in children.

As of yesterday, the CECC had recorded 44 severe illnesses in children as a result of COVID-19, and 17 deaths.

As the observed risk of myocarditis after vaccination is relatively low in children, the ACIP recommended shortening the time between doses to at least four weeks, the CECC said.

The committee had originally recommended two half-doses of the Moderna vaccine for children aged 6 to 11 spaced 12 weeks apart. The vaccines were administered from May 2, followed by the Pfizer-BioNTech vaccine on May 25.

However, as the number of local cases continued to climb, some experts recommended shortening the time between doses to between four and eight weeks.

An ACIP member told reporters that the committee originally recommended the 12-week buffer period, as experience showed the second vaccine dose is associated with worse side effects in children and adults.

If the second dose were to be administered too early, the committee was afraid the risk of myocarditis would be higher, they added.

However, after reviewing data from the past month of child vaccinations, the committee found fewer instances of myocarditis than expected, even fewer than among adolescents, the member said.

Although waiting longer between doses is recommended to reduce side effects, there is little change in vaccine efficacy, they said, citing observations in Canada.

Yet in light of the severity of the current outbreak, the committee hopes children can get vaccinated as soon as possible, they added.

More details, including when the policy is to begin, are to be announced in the coming days, the CECC said.

The center has also advised parents to be on the alert for symptoms of multisystem inflammatory syndrome in children （MIS-C） in the weeks after their child contracts COVID-19.

MIS-C symptoms, which can start weeks after a child tests positive for COVID-19, include a persistent fever, abdominal pain, diarrhea, vomiting, a rash, bloodshot eyes and headaches, the CECC said.

Studies have shown COVID-19 vaccination to be more than 90 percent effective in protecting against MIS-C, it added.

Several children have also developed encephalitis after being infected with COVID-19, prompting the health ministry to approve a proposal on Tuesday to study a possible genetic predisposition to complications of the nervous system from COVID-19 infection among Taiwanese children.