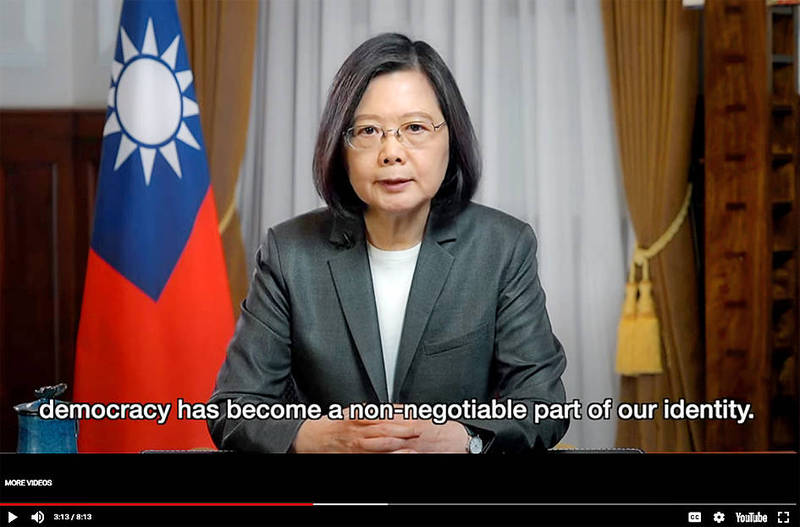 DEMOCRACY SUMMIT: President Tsai Ing-wen thanked EU members that supported the nation, saying that they might have been pressured to revoke their support

Taiwan is determined to defend itself and its democratic way of life, President Tsai Ing-wen （蔡英文） yesterday told the Copenhagen Democracy Summit.

Taiwan is willing to work with like-minded countries to uphold regional peace and security, she told the summit via teleconference.

Totalitarianism would not stop trying to steal from, oppress or threaten others, Tsai said, citing Russia’s invasion of Ukraine as an example.

Upholding Taiwan’s democracy, and maintaining regional peace and stability are the nation’s primary goals, she said, adding that Taiwanese are resolved to work with regional and global partners to achieve them.

Like in many other democratic countries, Taiwan’s democratic transition was brought about by those who sacrificed themselves to oppose an authoritarian regime, Tsai said.

The future holds great challenges, but preserving those values would succeed if people stand together for democracy and liberty, she said.

Tsai thanked EU states that have spoken up in support of Taiwan’s observer status at the World Health Assembly.

Taiwanese are deeply moved by the support from our friends in the EU, she said, adding that some of them might have been pressured to revoke their support.

Taiwan is ready to become a key and indispensable partner in critical industries depending on safe global supply chains, she said.

Key technologies will not be exploited by totalitarian states, she added.

A delegation of Taiwanese lawmakers from across party lines also attended the two-day summit, which ended yesterday.

Most speakers on that day criticized Russia and China, saying that they used disinformation to to sabotage and divide democratic countries, she said.

Singer Kimberley Chen （陳芳語） — whose works has been banned in China after she published Fragile （玻璃心）, a balad satirizing nationalistic Chinese Internet users — performed that song during a session titled “Voices of Freedom — Standing up to Music Censorship” on the closing day.

The performance might cost her millions of Chinese fans, but having freedom and democracy is much more important than market share in China, she said.