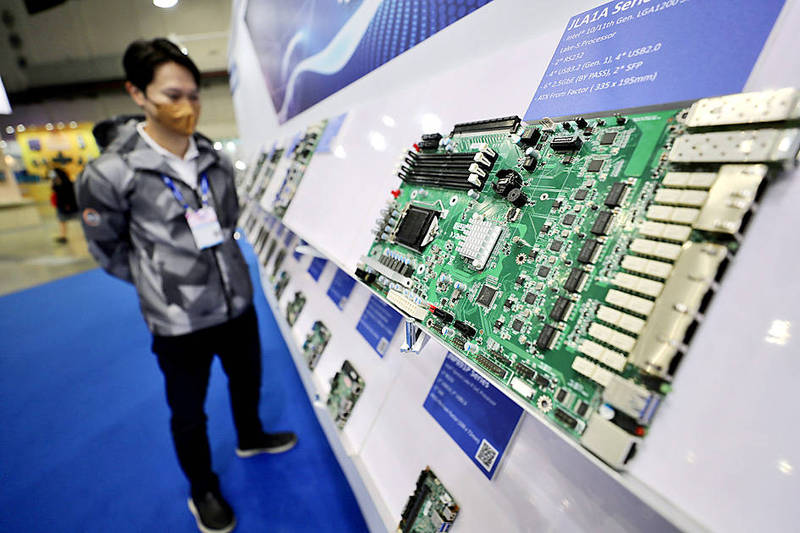 A man views different computer motherboards during the Computex exhibition in Taipei on May 24. Photo: Ritchie B. Tongo, EPA-EFE

Taiwan’s market share in advanced industries relative to its size is more than double the world average, driven almost solely by its dominance in computers and electronics, a report issued on Wednesday by a Washington-based research institute showed.

The report by the Information Technology and Innovation Foundation measured the performance of 10 leading economies across seven key sectors in the years 1995, 2006 and 2018.

It found that in 2018, Taiwan’s market share in the industries relative to its size was 219 percent higher than the global average, followed by South Korea at 206 percent.

In terms of performance, the report said that Taiwan’s global share of advanced industrial production sectors had declined slightly over the past 25 years, slipping in six of the seven industry categories.

However, in one industry category — computers, electronics and optics — Taiwan’s global share grew by 1.3 percentage points, largely due to the performance of companies such as Taiwan Semiconductor Manufacturing Co （台積電） and Hon Hai Precision Industry Co （鴻海精密）.

Overall, Taiwan’s advanced industrial output was “the least diversified” of the countries in the study, with almost nine times more computer and electronics production as a share of its economy than the global average, the report said.

“Because of this, advanced industries make up more than twice the share of its economy as the global average,” despite Taiwan’s weakness in industries such as pharmaceuticals and automobiles, it said.

More broadly, the report aimed to highlight the US’ relatively weak position in a range of advanced industries that are strategically important for economic and national security.

Compared with China, whose share of global output in the industries grew from less than 4 percent in 1995 to 21.5 percent in 2018, the US’ market share fell from 24 percent to 22.5 percent, the report said.

Calling the findings “an urgent wake-up call,” it urged the US government to launch an economic “moon shot” initiative aimed at increasing its relative level of advanced industry concentration by 20 percentage points over the next decade.