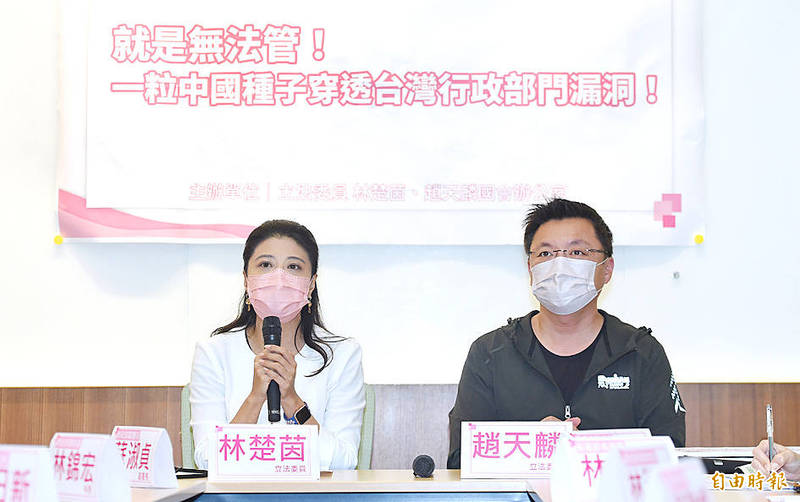 Legislators yesterday urged the government to investigate and seize seeds that were imported from China and illegally sold in Taiwan through Facebook groups.

Democratic Progressive Party （DPP） legislators Michelle Lin （林楚茵） and Chao Tien-lin （趙天麟） at a news conference at the Legislative Yuan in Taipei warned about the risks the seeds pose to national safety and agriculture.

Lin said that she received a report in April that someone on Facebook was selling pepino melon seeds of unknown origin, and claiming that the seeds can prevent and heal cancer, as well as reduce blood pressure and blood sugar levels.

Another Facebook seller was offering black tomato seeds, which the seller claimed lowered the risk of men developing prostate cancer and heart disease, she said, adding that current regulations do not prevent such sales.

There is no law prohibitng claims that seeds, as opposed to food, could have curative effects, Lin said.

The Food and Drug Administration （FDA） would not halt the Facebook sales, as it questioned whether seeds could be counted as food, she said.

Lin said her colleagues inquired about the seeds and purchased them, which were falsely registered as “decorations” by the sellers.

Chao said that the sellers ignored regulations on marketing, importing, packaging and logistics to illegally sell products that were sent by untraceable companies.

“Thousands of people place orders every day, and no seller has been caught,” Chao quoted a seller as allegedly saying.

Customs officers should easily be able to discern seeds and plants from “decorations” as they appear orange in X-ray scanners, he said.

He proposed using dogs, which were helpful in detecting African swine fever, to identify illegal plants.

He also asked how the products already being imported can be traced.

Bureau of Animal and Plant Health Inspection and Quarantine Deputy Director-General Chou Hui-chuan （鄒慧娟） said that seeds should be registered and pass inspection before being imported.

The agency would investigate and handle reports of any seeds of unknown origins entering the country and ask that Facebook sales be halted, Chou said.

FDA Deputy Director Lin Chin-fu （林金富） said that food advertisements must not include misinformation or exaggerations, or claims to have curative effects.

Although seeds are not fruit, the same penalties apply to fruit that grow from the seeds, he added.

Customs Administration Deputy Director-General Su Shu-chen （蘇淑貞） said that abnormalities detected in imported goods are examined at customs, adding that seeds and plants are sent to the Bureau of Animal and Plant Health Inspection and Quarantine for further inspection.