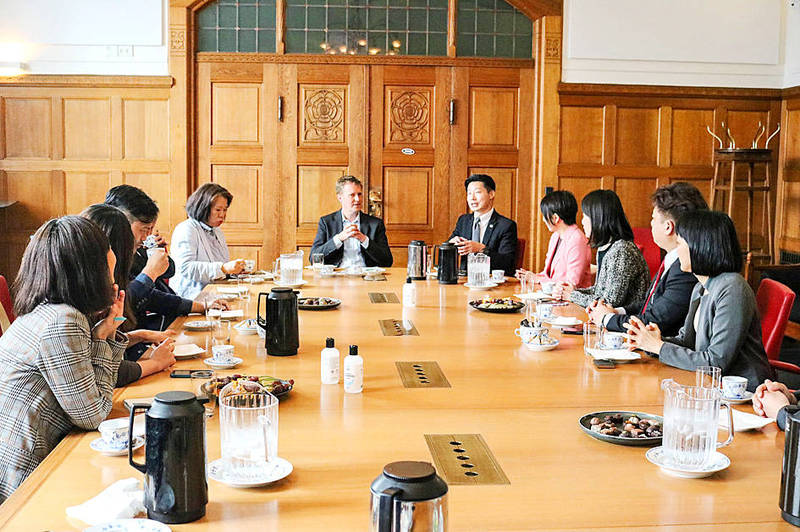 The Legislative Yuan is participating in the Copenhagen Democracy Summit, which began yesterday and ends today, held by the Alliance of Democracies, New Power Party Legislator Claire Wang’s （王婉諭） office said in a statement.

The delegation yesterday was given a tour of Copenhagen City Hall by city councilor Wang Heidi （王海蒂） and met with Lutken and Representative to Denmark Lee Shying-jow （李翔宙）, it said.

Lutken said on Instagram that he greeted the delegation and discussed the challenges faced by democratic countries around the world.

Lutken said that Denmark and Taiwan are “important partners in the democratic camp,” even more so given China’s rise in the past decade, and Russia’s invasion of Ukraine.

He said he admires Taiwan’s technology industry and its links to the educational system, saying that technology occupies an essential place in the world and provides indispensable resources.

Lutken said he regrets not being able to visit Taiwan during the COVID-19 pandemic, adding that he hopes to do so when Taiwan relaxes its border controls.

The delegation invited Lutken to Taiwan for further talks on democracy, technologies and the renewable energy industry.

Wang said that she is interested in Taiwan’s efforts in the renewable energy industry, which has a long history in Denmark, adding that she would like to exchange ideas on energy policies and technologies.

Lutken said that renewable energy infrastructure in Denmark has been well established, so the government no longer provides subsidies and relies on the industry to expand in the capital market.